20 Holiday MOCs To Bring In The Cheer

It is the Boxing day and what better way to celebrate than to check out what other builders have been busy with this holiday season.

I’ve compiled a handful of builds that I’ve come across over the past couple of months leading up to Christmas. They are not ranked in any way, just a collection of really cool builds by equally awesome builders. Enjoy!

This 1,400 pcs “Ultimate Collectors Series” model is a real tribute to Santa’s mode of transport come Christmas night. The curve bricks used for the reindeers really gives it an organic look and they are fully posable.

I really love the detail of how the runners are actually bent slightly outwards as opposed to how some would portray them 90 degrees to the vertical. This set is currently on Lego Ideas. Do drop a vote here if you want this to be an actual set.

李默父 striped the exteriors of this cuckoo clock and adorned it with LEGO. He managed to incorporated the minifigures into the clock mechanism as well as converting the pendulum into one of Santa’s red boot.

Here is a video that he shot of his cuckoo clock in action.

While we already had an official LEGO Winter Bakery (10216) Sheloveslego‘s model is a completely upgraded and expanded version. The roof is removable to reveal the highly detailed kitchen interiors.

The bakery is stocked with treats and she even created an adorable sign for the entrance. I love the fact that Santa is chilling on the roof with a hot cup of cocoa.

A humorous take on a scenario where Santa’s Christmas deliveries are suddenly interrupted by the German’s anti-air cannons. The 1×4 double sloped curve brick is put to good use here to represent the undulating snow dunes on the plains. 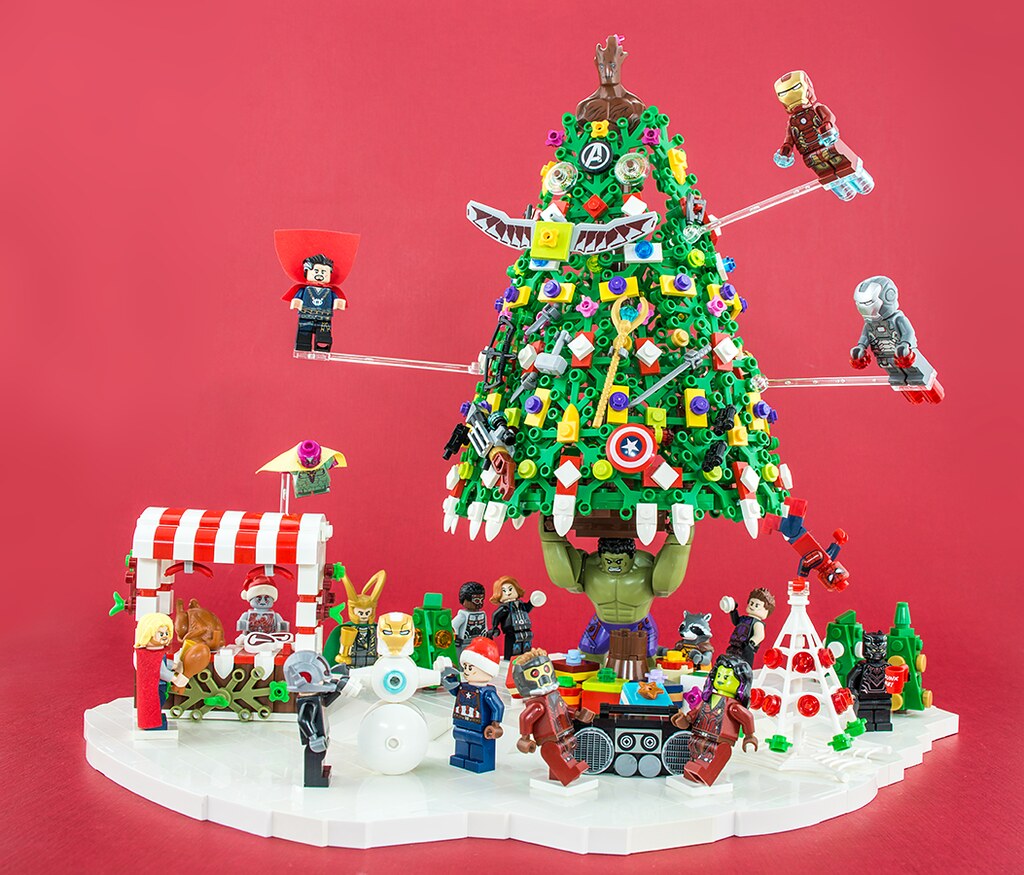 Milan has revealed himself as a pretty adept Marvel fan with this Marvel themed Christmas diorama that is just packed with in-jokes and references to the movies.

I particularly love the fact that the Hulk has ripped out the Christmas tree with Groot at the top.

Rudolph and his Christmas Tree by Ian Ying

A cute little vignette with a brick built Rudolph and an entire Christmas tree build completely out of LEGO plant limb elements. The versatility of that element is reflected even in Rudolph’s antlers!

Nothing brings instant festive joy than a parade by Disney characters and Bob chose to build a one around an old jalopy complete with a host of Disney minifigures.

The use of the 1×2 Masonry bricks is a great choice to create the really old brick roads.

And we can’t leave our favourite Disney alien of mayhem out of this list can we? WC Lee chimes in with this cute little diorama featuring a bunch of mammalianoids (Stitch) gathered for Christmas carols.

I need to remember to use the red sausage element as a nifty way to create the tail end of the wreaths.

This is a micro scale version of a castle scene by Samuel comes complete with a horse and carriage, bridge and Christmas tree. I thought the use of the 1×1 clips was a nice touch to create the flying flags atop of the castle spires.

Whats more, there is actually a compartment below that functions as a drawer to hold your jewellery and other knick knacks. 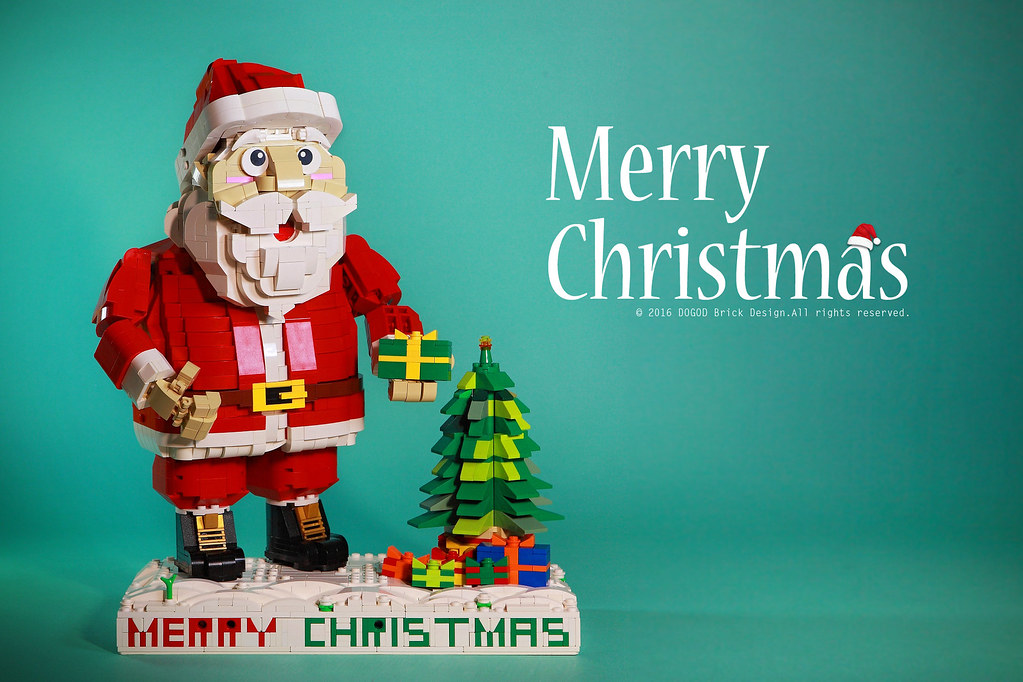 DoGod has always impressed me with his builds and his latest Santa offering definitely upholds that notion. The expression on Santa’s face is perfectly created with the use of slope and curve bricks and the use of hinges for the beard gives it a much more ’rounded’ look.

The back of this Santa build actually opens up to reveal a habitat for the minifigure sized Santa too. 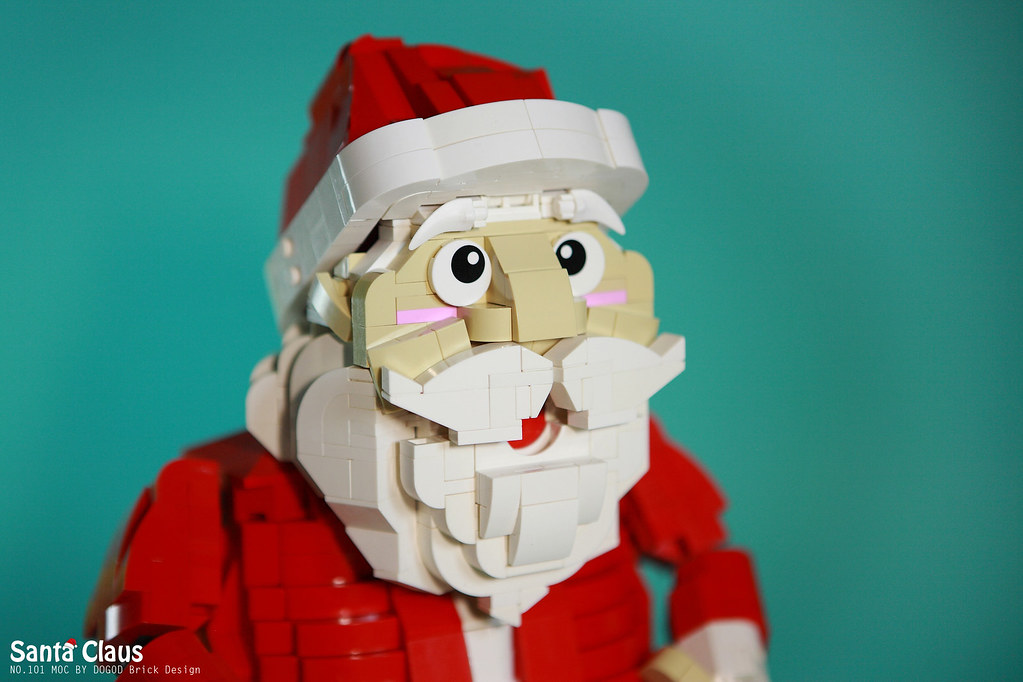 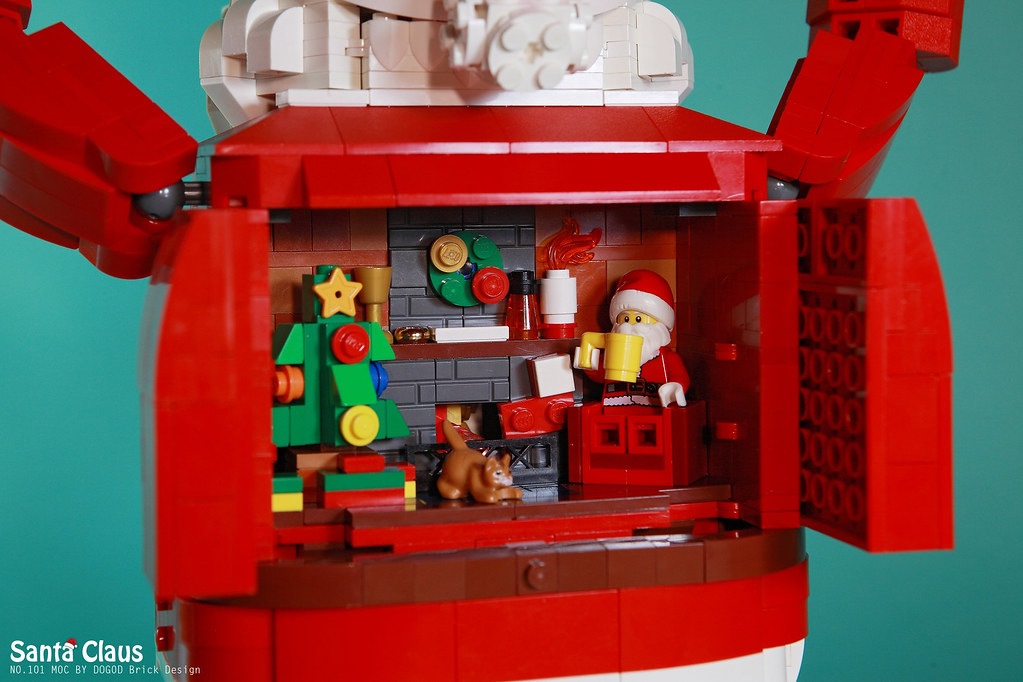 Even Batman celebrates Christmas and Chakhei completely transformed the original Tumbler into this festive version that is worthy for a Santa to use on his deliveries.

I love that there is even space to stick a reindeer head on the front of the car.

This may seem a little odd for a Christmas themed build but I really like how James is able to achieve an organic looking vehicle in the likeness of an Angler Fish for the Swamp Creature with a mixture of Bionicle / Hero Factory parts and LEGO elements.

What I really like about Schola‘s build is that the model only has a colour palette of Blue, Dark Blue and White which makes for a very pleasing look with the snow falling off the roofs and the children playing in the snow covered yard.

This intergalactic take on Santa’s Christmas ride is made even more impressive when you find out that it is primarily built with just Pick-A-Brick elements collected over the year.

A simple winter scene made even more memorable by the inclusion of these ultra cute ‘bobble-head’ minifigures. He replaced the torsos with regular plain minifigure heads which kind of gives this oversized bobble-head look which is super adorable.

There is only so much one can pack into a 32×32 baseplate but Gerald really upped the ante on the amount of details he can squeeze into this cosy little winter street scene.

There are some really clever use of elements like the minifigure snow shoe accessory as part of the wreaths or the harpoon accessory as the staircase railing. 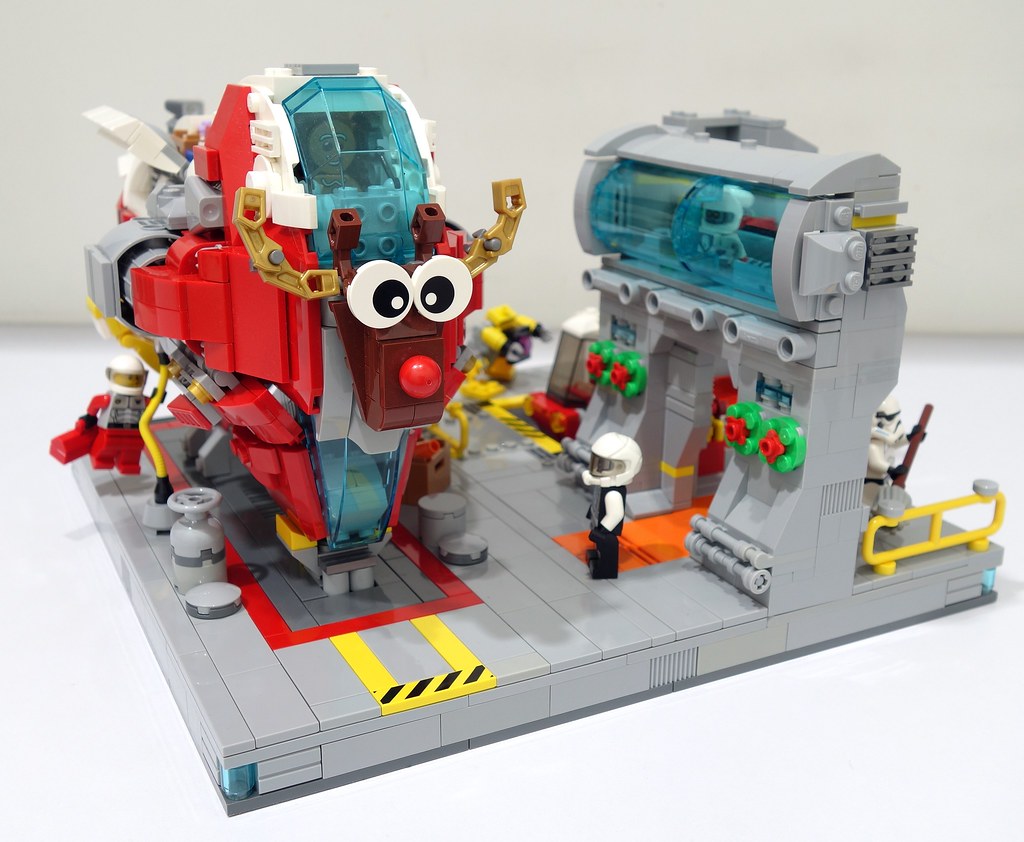 Santa has resorted to taking to space for his deliveries this year and Chubbybots has created this awesome space ride. I’ve actually seen this one up close and it comes with dual cockpits with one on top (you can see Gingerbread man in it) and another one directly below. 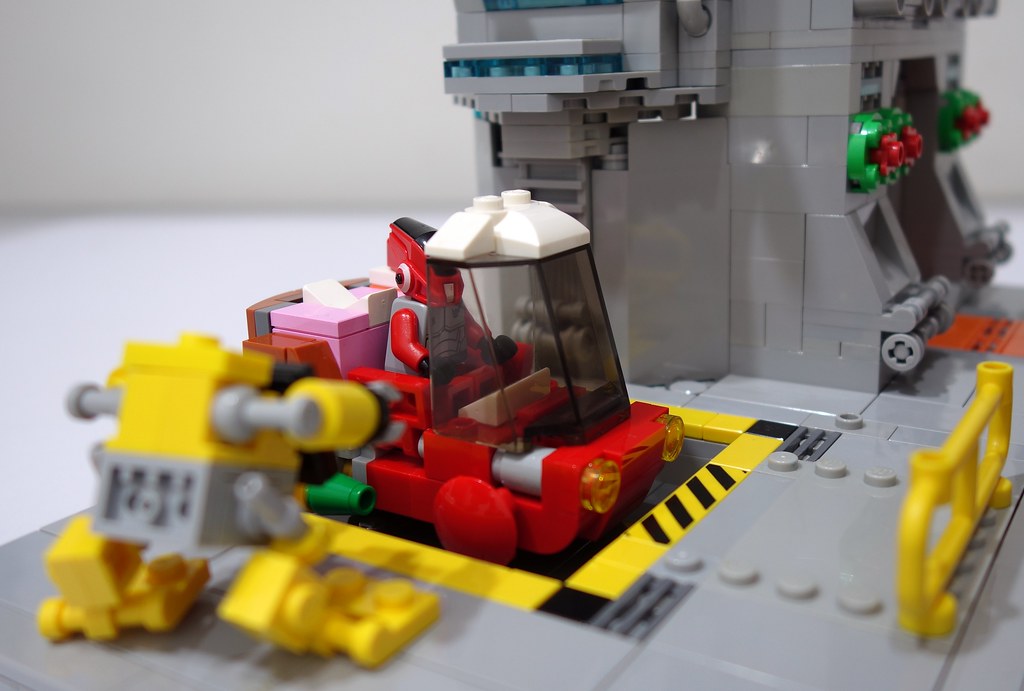 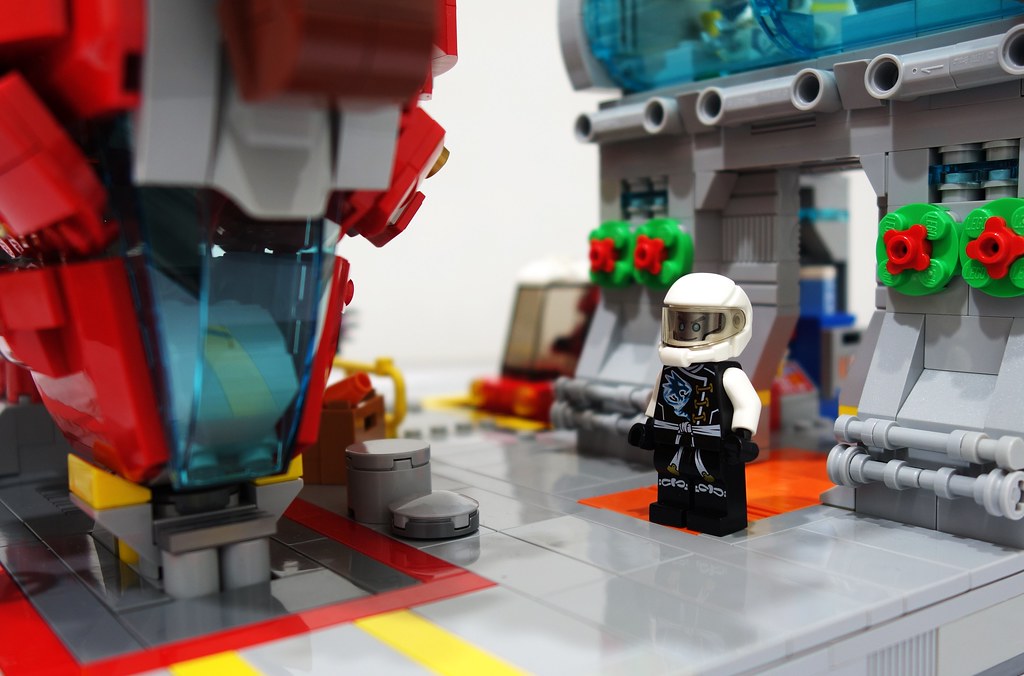 You seldom come across decorative bookends nowadays so it is really nice to see these pop up just in time for Christmas. The two ends are reflective of each other with one being an indoor tree and the other one outdoors, blanketed in snow.

By the way, the books are made out of LEGO too.

The guys at 360 Stop Motion built up their LEGO Winter Train set and stuck a 360 camera on it to record it’s journey through their LEGO Winter mocs. You can change your viewing perspective by clicking on the video in real time and shift the angle. Pretty cool eh?

Hope that you’ve enjoyed this amazing collection of LEGO Christmas builds as much as did. Enjoy your Boxing Day and have a blessed New Year!