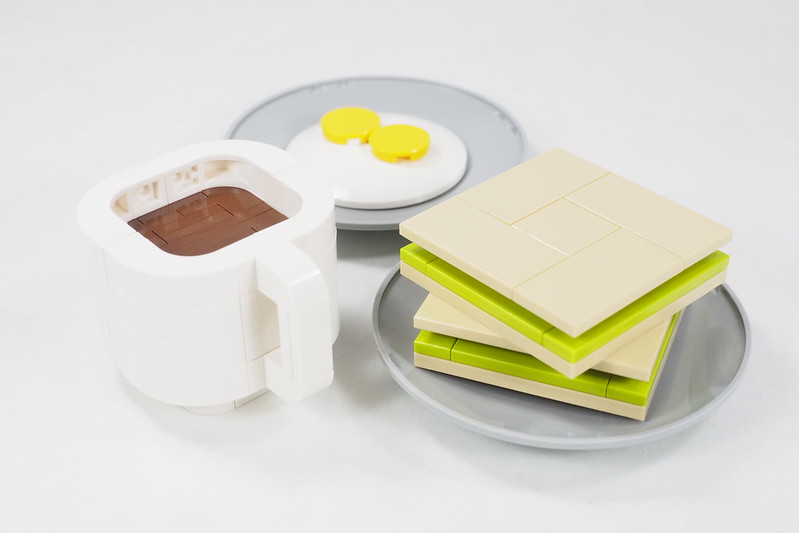 The second Singapore mini-build for the Cities of Wonders campaign has been released and we have a quick review for you.

The Kaya Toast ‘set’ actually comes with a couple of half boiled eggs and a cup of coffee/tea and it is usually eaten during breakfast or second breakfast or basically any time you feel hungry. 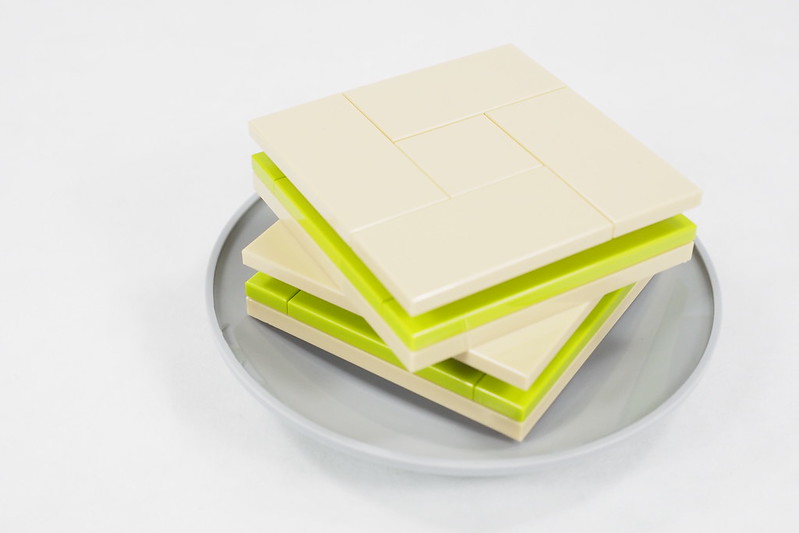 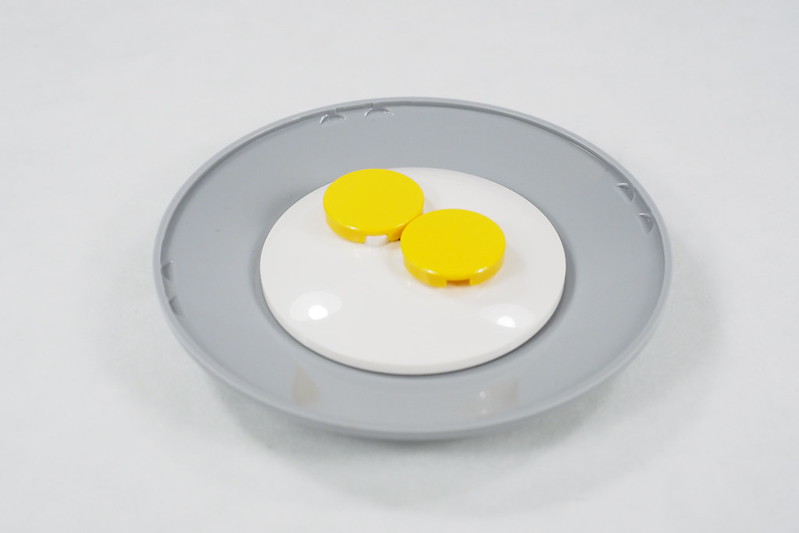 The word “Kaya” is actually Malay for Coconut and the spread consists  of a combination of coconut and egg, flavoured with pandan leaf (pandanus extract) and sweetened with sugar. 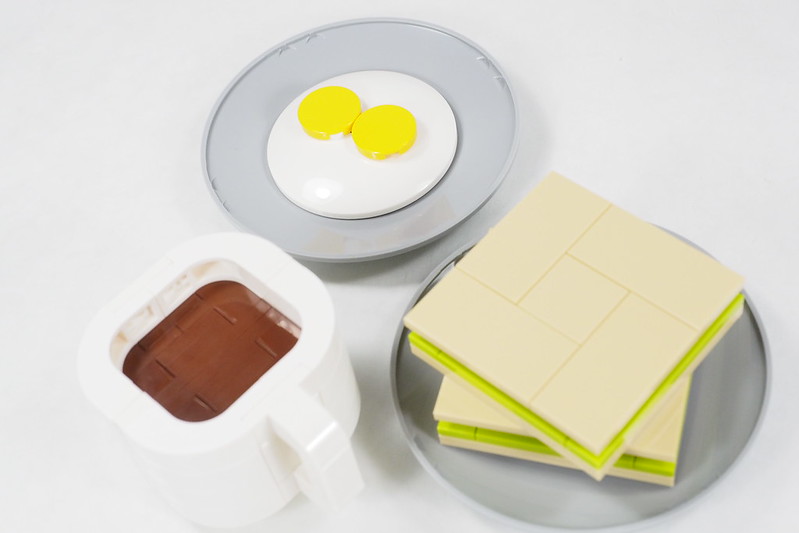 The set consists of only 92pcs which makes this the smallest Mini-build set from the series. 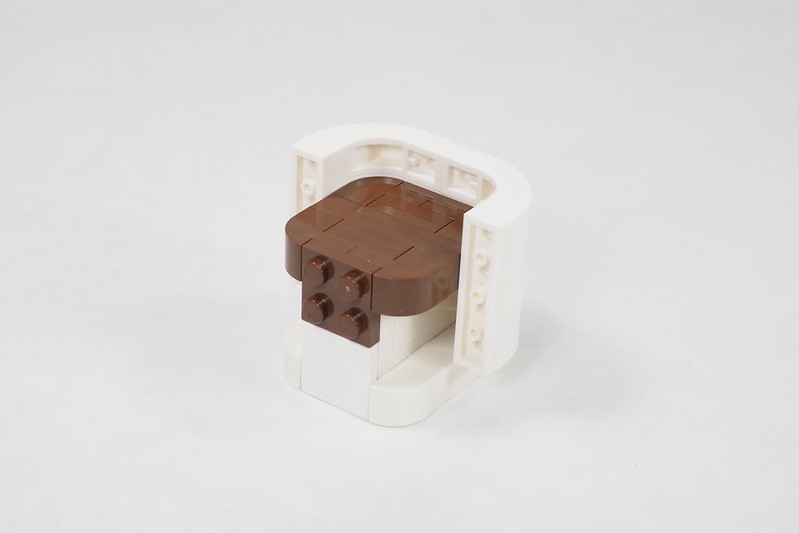 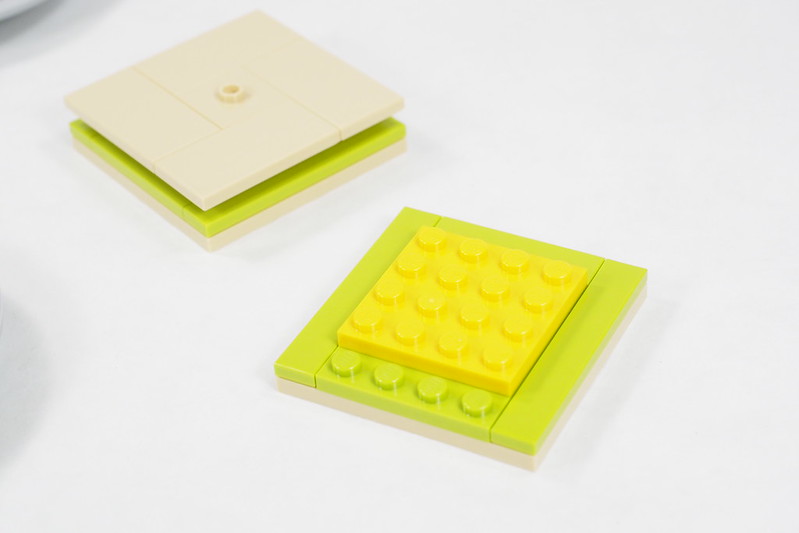 This is also by far one of the fastest cultural mini-builds that I have constructed. It actually took only ten minutes standing around the make-and-take table in Toys ‘R’ Us to finish the build. 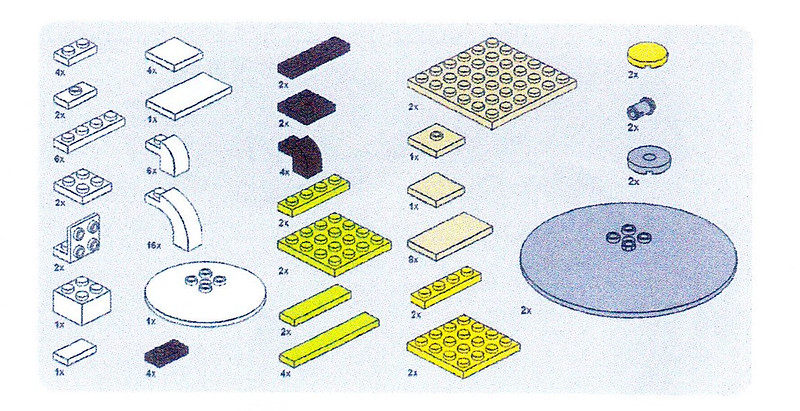 Unlike the Cultural Mini-builds of the other participating countries, Singapore opted for their giveaway to be distributed through a make-and-take counter at the designated locations. 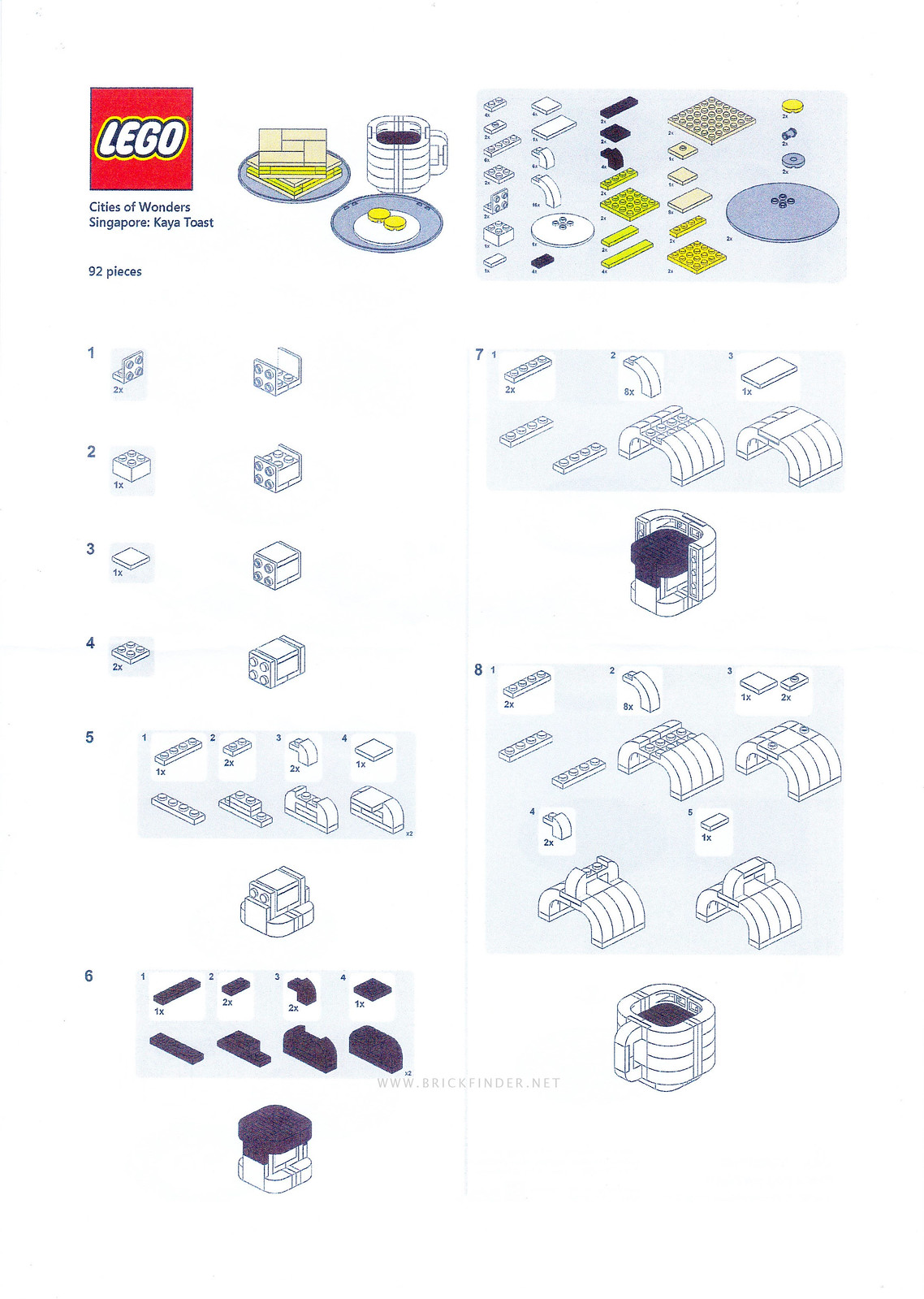 This would explain the omission of the yellow box packaging that is the common thread for the different Cities of Wonders campaign throughout Asia. 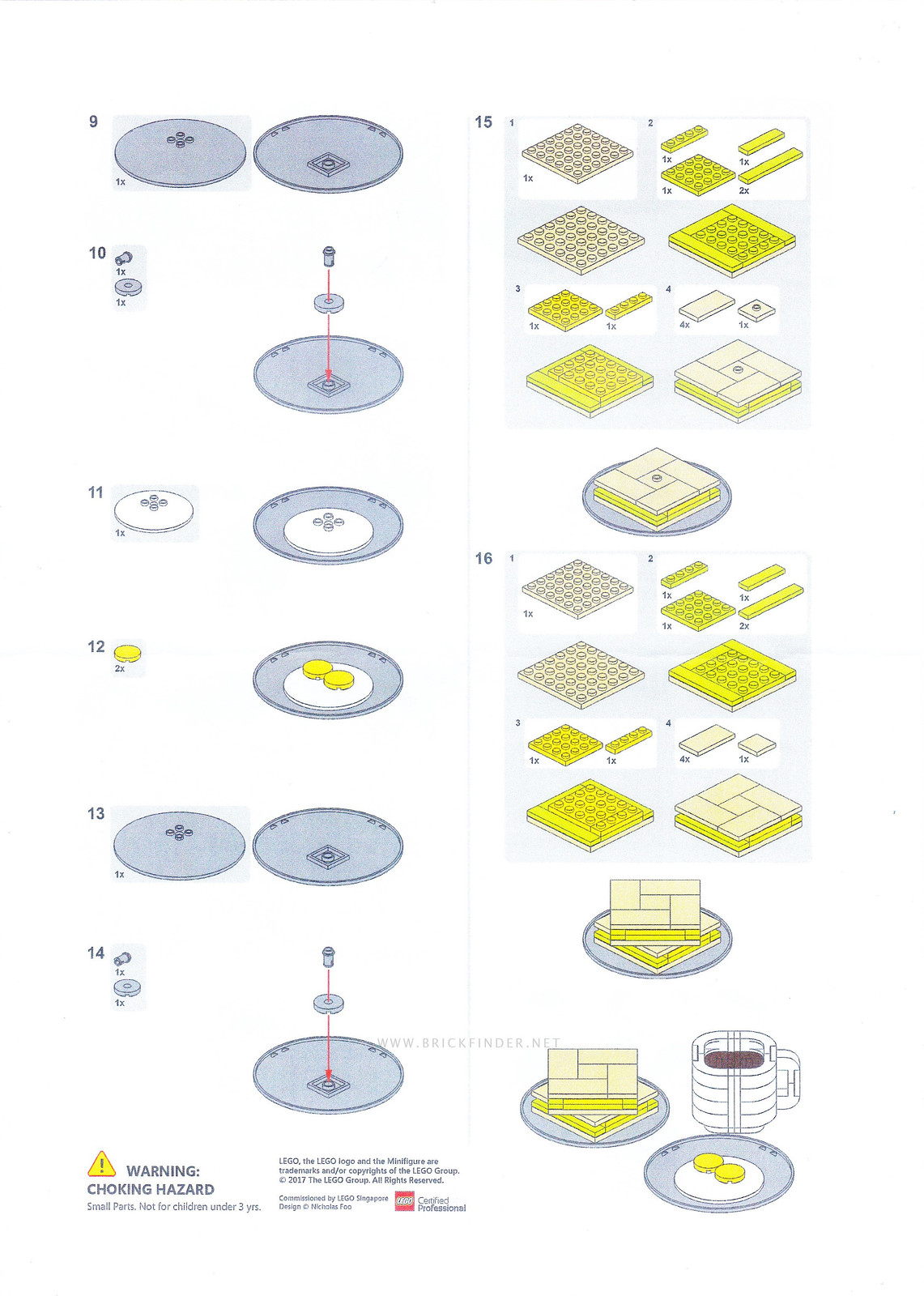 The set is actually made up of three builds, the coffee (“kopi”) cup, the plate of half boiled eggs and the plate with the kaya toast on them.

The cup can be a bit challenging as it involves some snot (Studs Not On Top) techniques to achieve the cup and handle itself, along with the reddish elements to simulate the ‘coffee’.

The Half boiled eggs and Kaya Toast are essentially stacking of plates and tiles on top of one another.

This is one of the more ‘accurate’ mini-builds from LEGO Certified Professional Nicholas Foo’s line up as the Kaya Toast set is scaled to life-sized. The cup may be a little too small in general but it feels like the right size for an espresso. 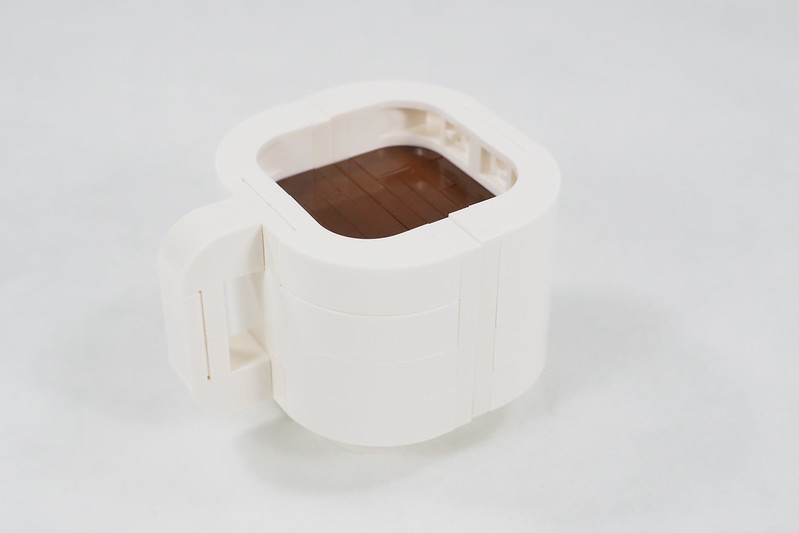 Nicholas used two 10 x 10 Light Bluish Grey (LBG) inverted dish as saucers / plates and the 6 x 6 inverted white dish for the egg whites which are both nice elements to add to your library of parts. 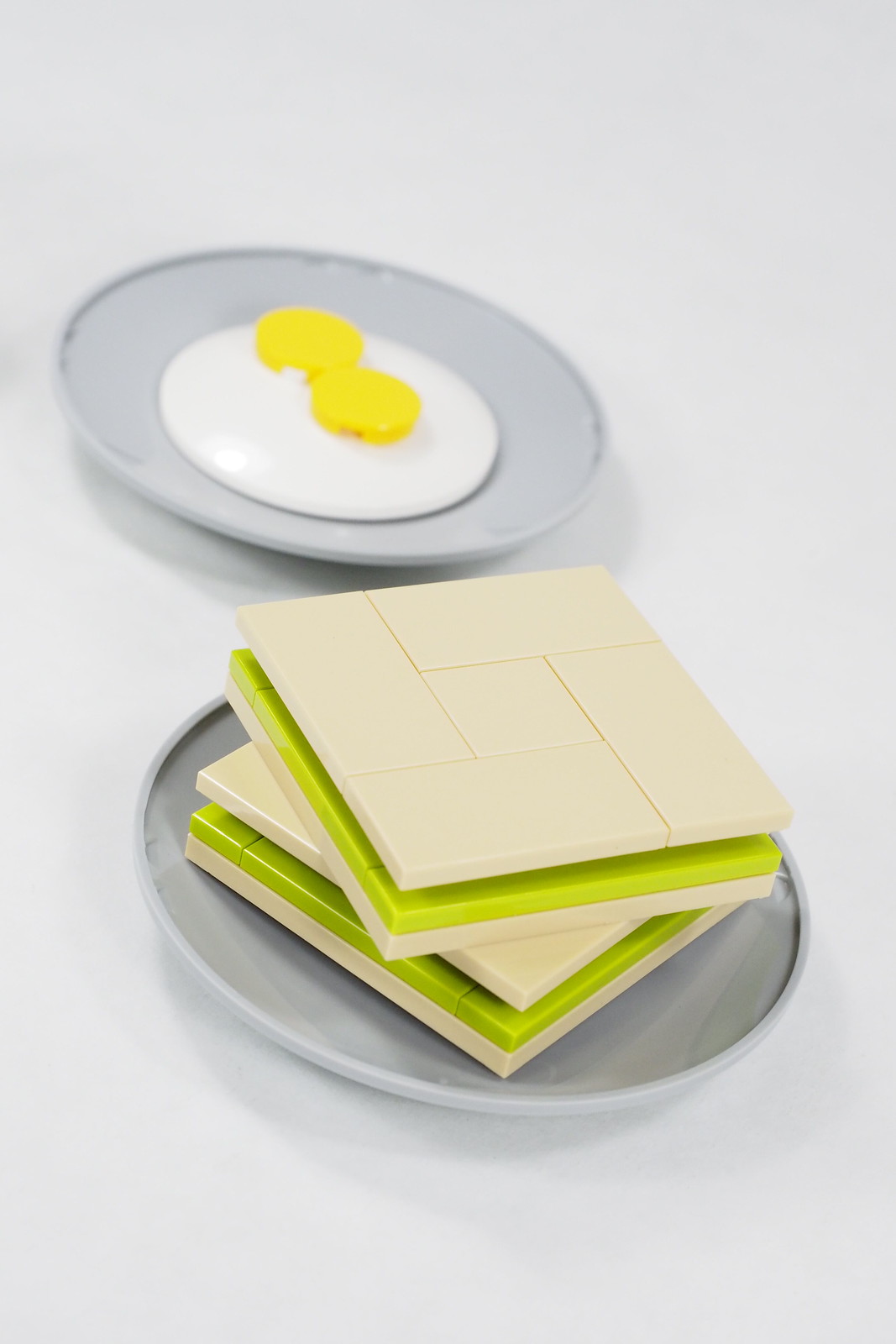 It is also interesting to note that the LEGO colour palette is able to replicate, quite accurately, the colours of the bread, kaya toast and the half boiled eggs. 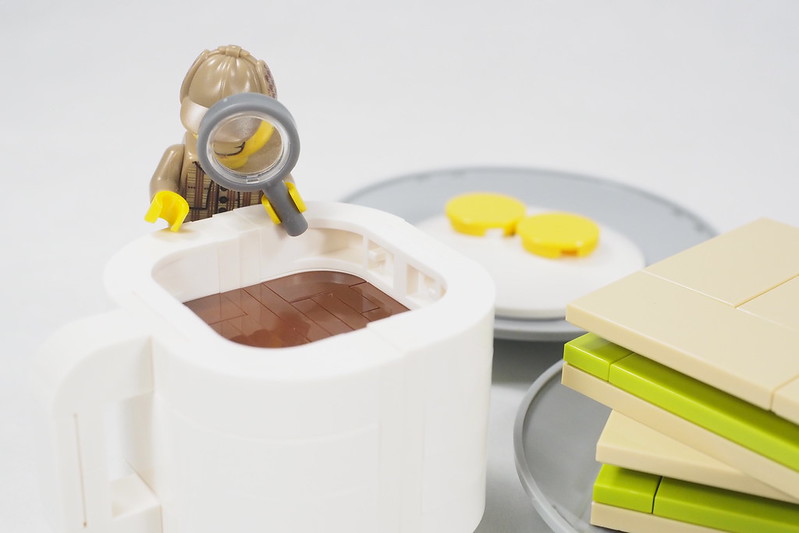 While I feel that the theme to the Singapore leg of the Cities of Wonders campaign is an unconventional choice, this is actually one of my favourite builds of the series. It reminds me of a build that I came across last year at the The Brick Collective: Tiong Bahru exhibition. 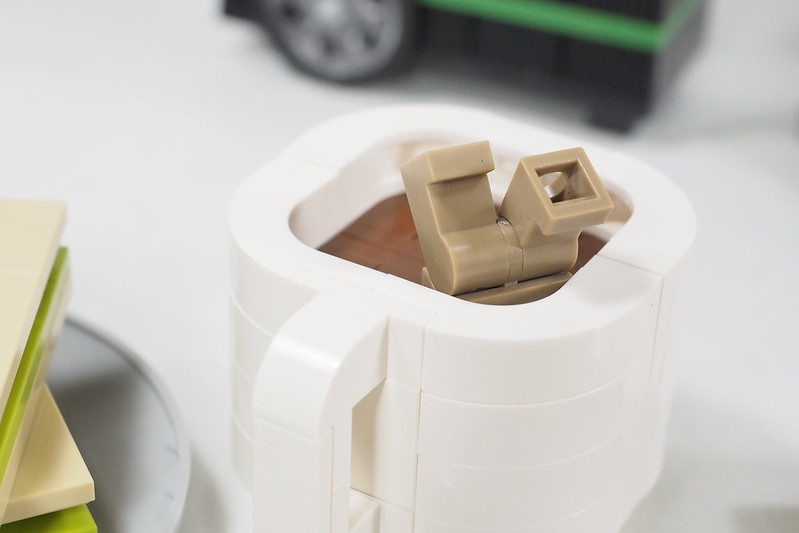