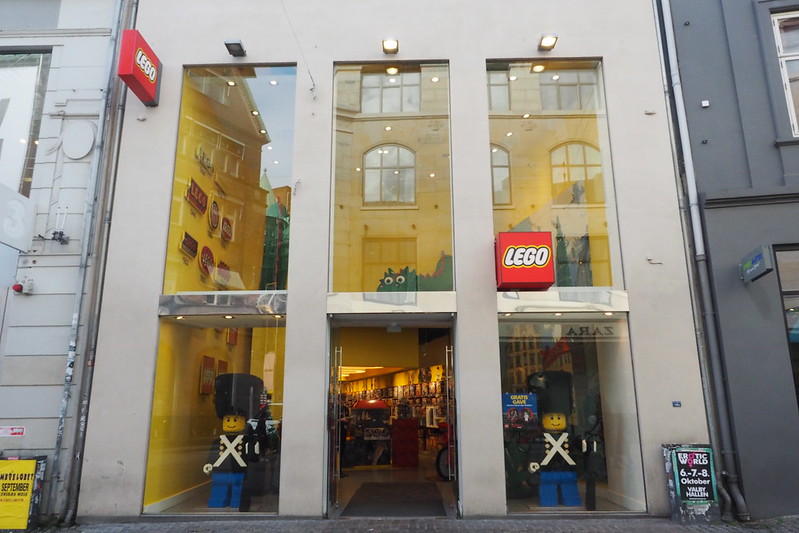 There are currently two LEGO Brand Stores in Denmark and one of them is located in the nation’s capital of Copenhagen. 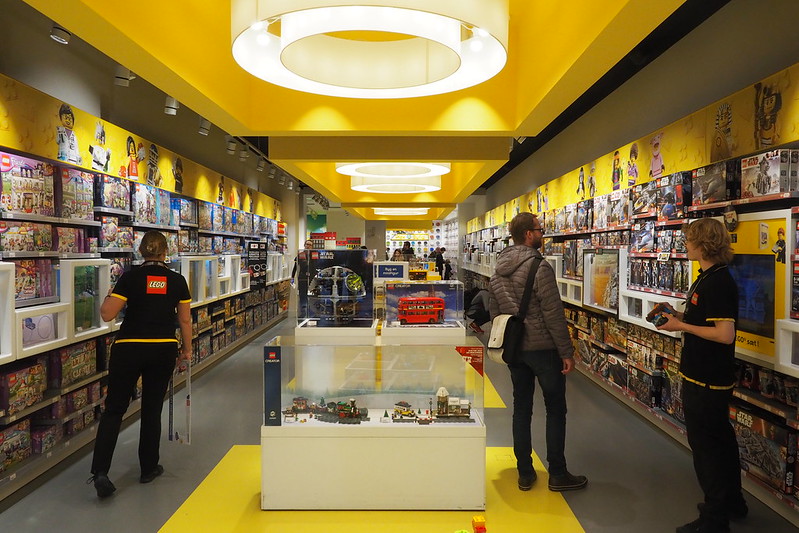 It is located along Vimmelskaftet Stroget and it is easily one of the bigger LEGO Brand Store that I’ve ever set foot in. It may not look big from the facade but the store stretches in pretty deep. 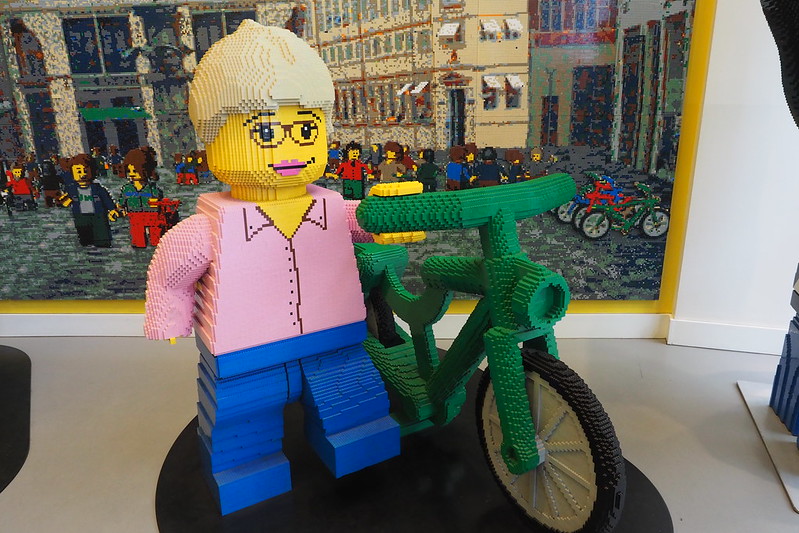 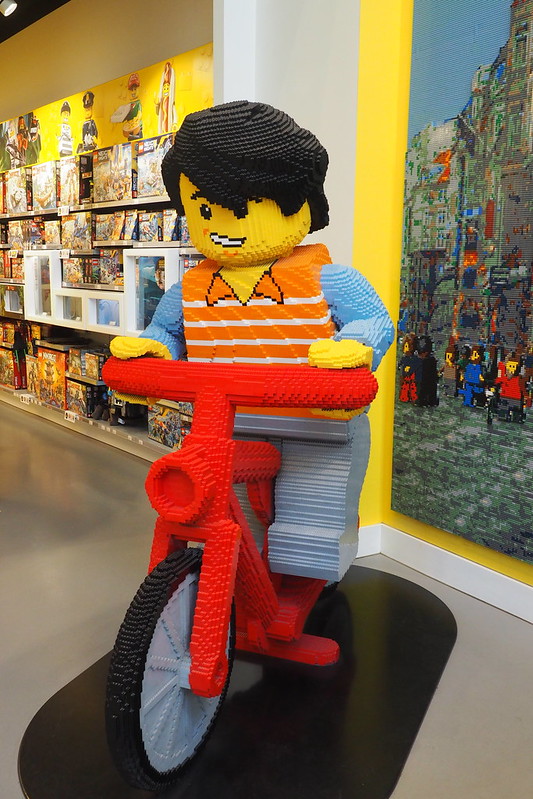 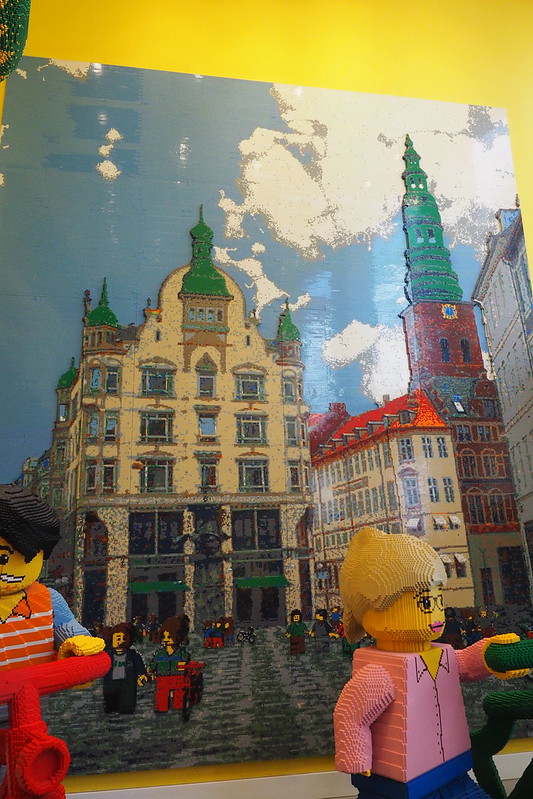 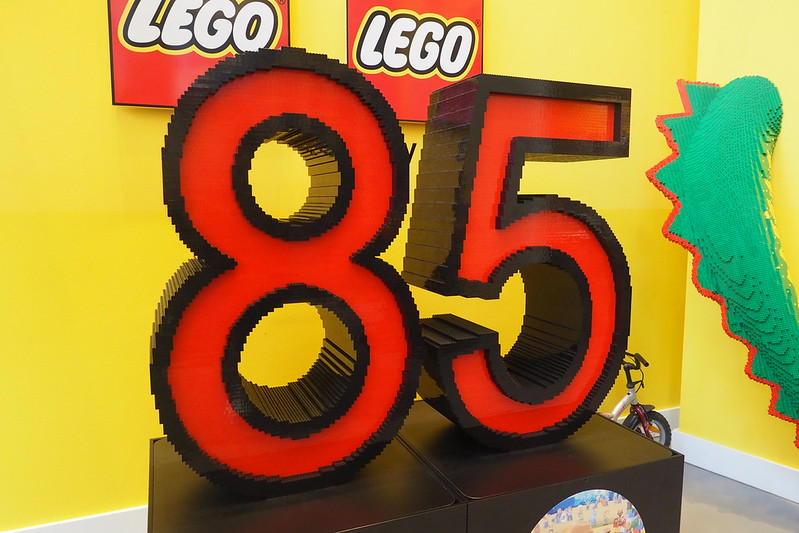 Unlike the LEGO Certified Stores from back home, these LEGO Brand Store (LBS) have the luxury of space which shows in their inclusion of huge LEGO sculptures scattered around the entrance and dioramas inside the store. 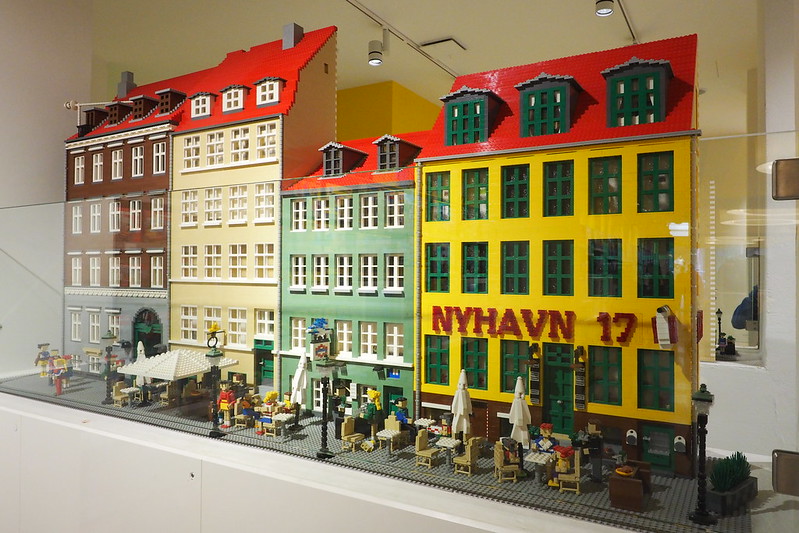 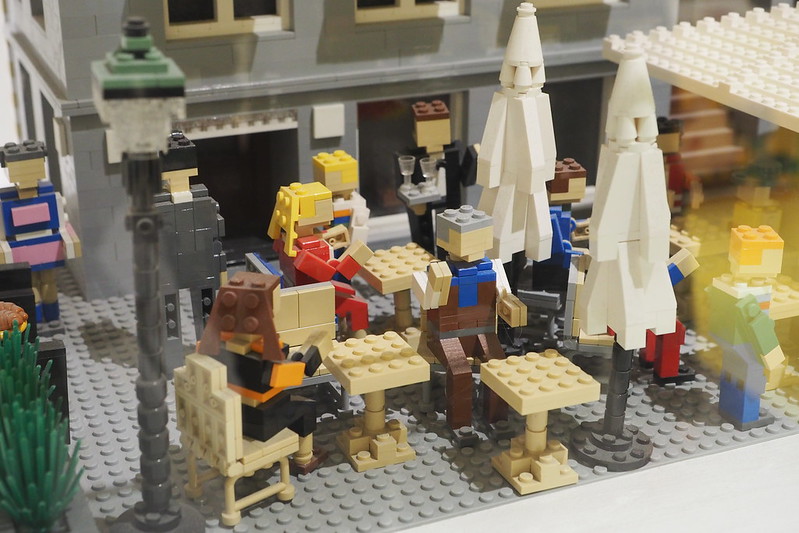 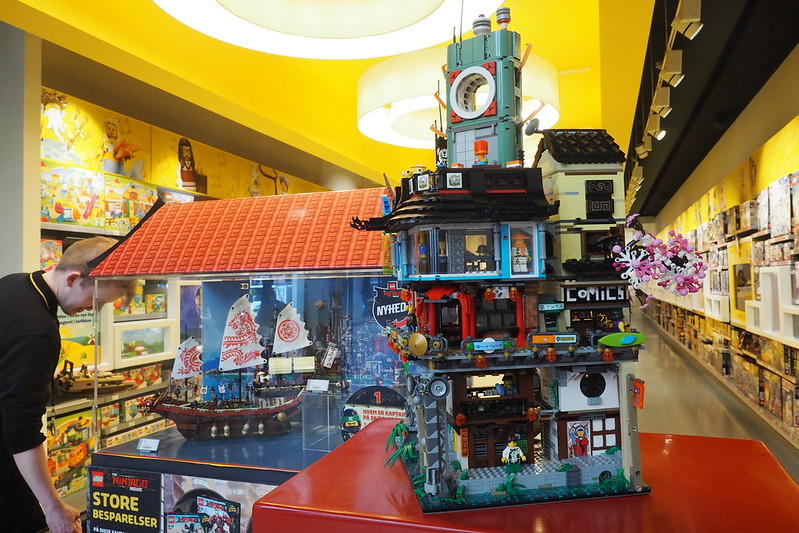 They had the LEGO Winter Village Station set on sale already as the LEGO VIP program allows members to purchase some sets ahead of the public release. 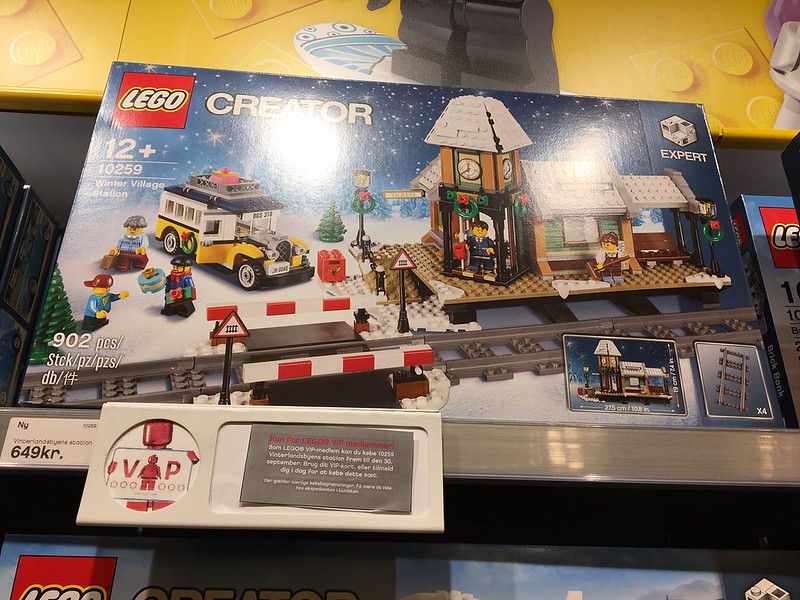 It was retailing for 649 Krone which is approximately SGD144.20 / USD$104 which is quite a bit on the pricey side since the Singaporean recommended retail price (RRP) is only SGD$109.90. 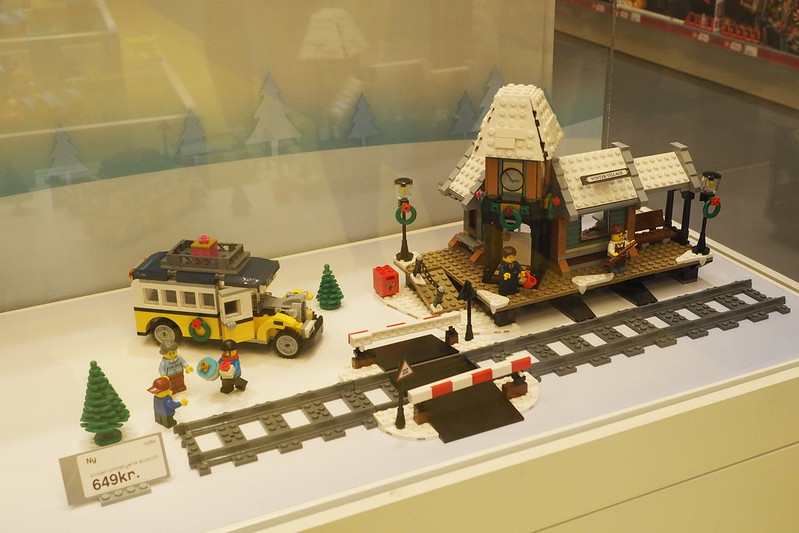 Prices are generally more expensive than other parts of Asia but do note that as a tourist, you are able to claim back 20% sales tax that you pay when you leave the country.

And of course, the LEGO Star Wars UCS Millennium Falcon (75192) was on display for everyone to drool upon. Fun Fact: Due to the angled position of the Falcon, most of the sections had to be glued down according to the sales staff. 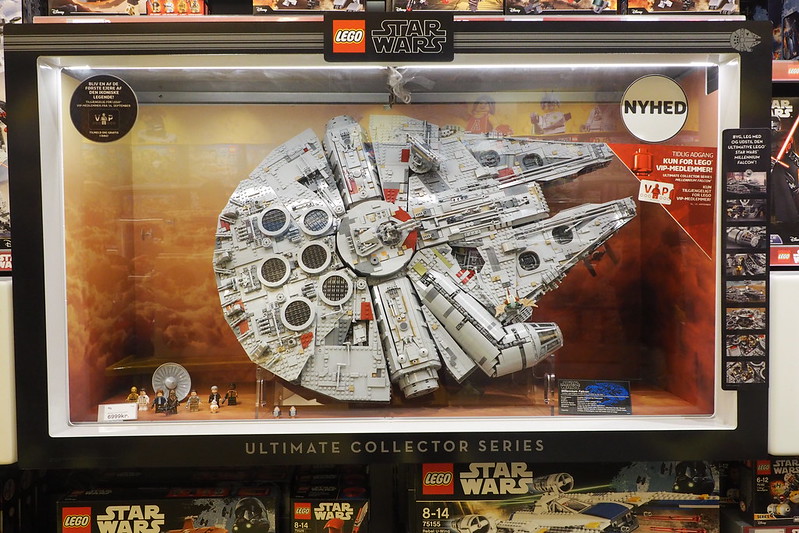 Managed to snag a couple of the LEGO Star Wars UCS Millennium Falcon (75192) brochures although I only realised later that it is written in Danish! 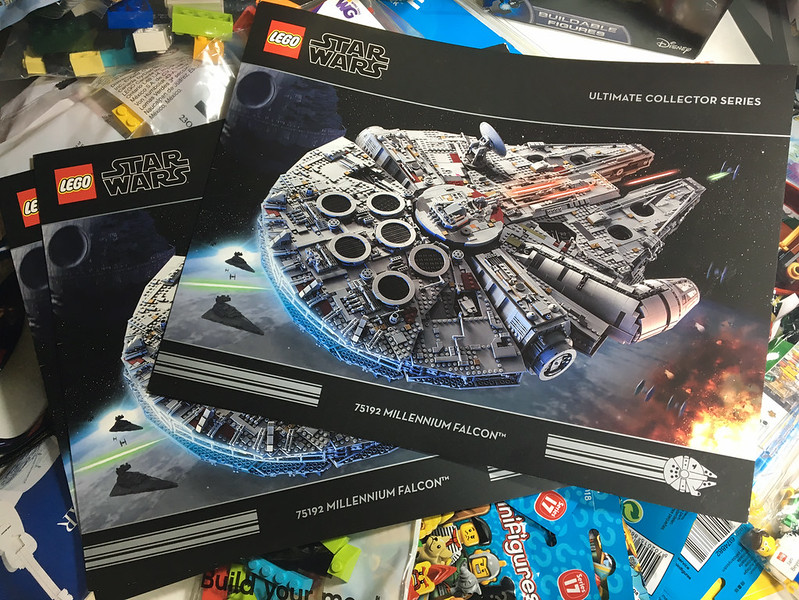 There is a reason that this outlet is called a LEGO Brand Store which is that it is very focused on promoting the LEGO Brand experience which extends beyond the purchase of the product. There are many activities and unique items here that adds value to the purchase which are not normally found in a LEGO Certified Store back home.

One of the activities that I hope to see in Singapore in the future are the Monthly builds which are great activities for kids to get introduced to LEGO. Every month, the LEGO Brand Store conducts build activities that children are able to sign up for (free) where they are taught how to build a small LEGO model which they get to keep. 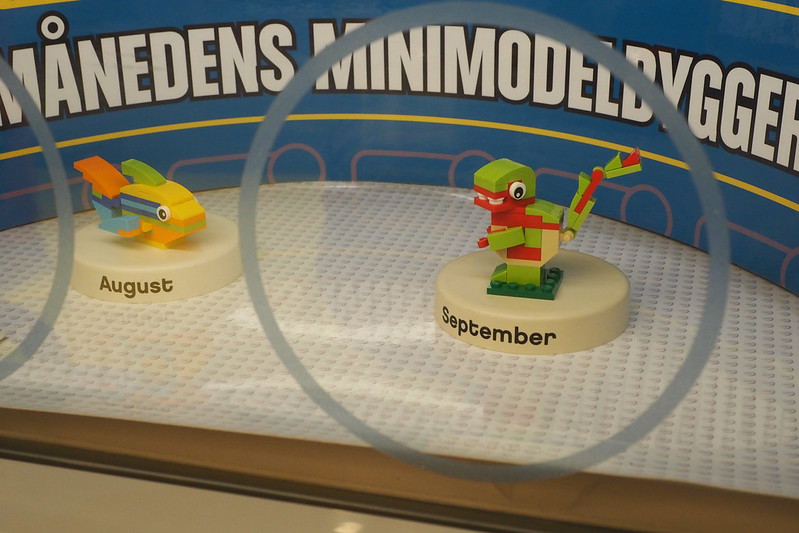 The store also showcases LEGO models by the local AFOL community in the ‘brand ribbon’ which is a nice way to engage the fans. 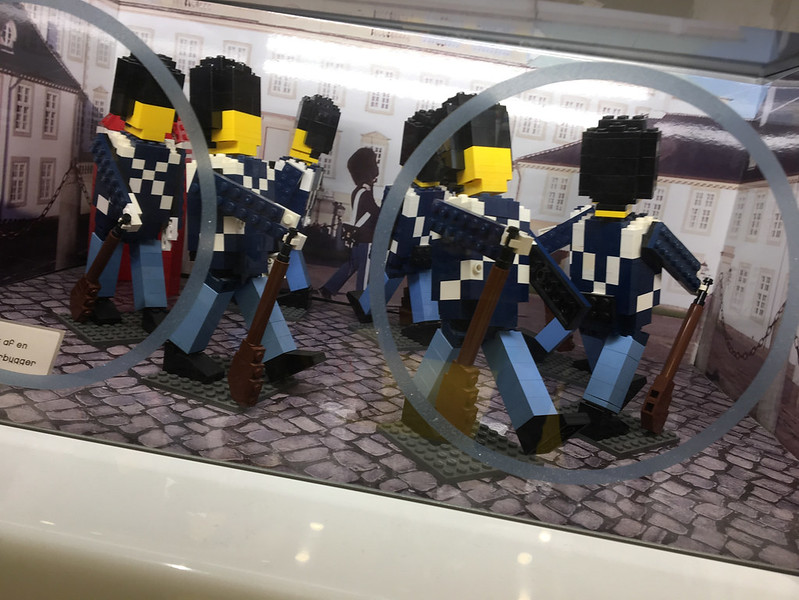 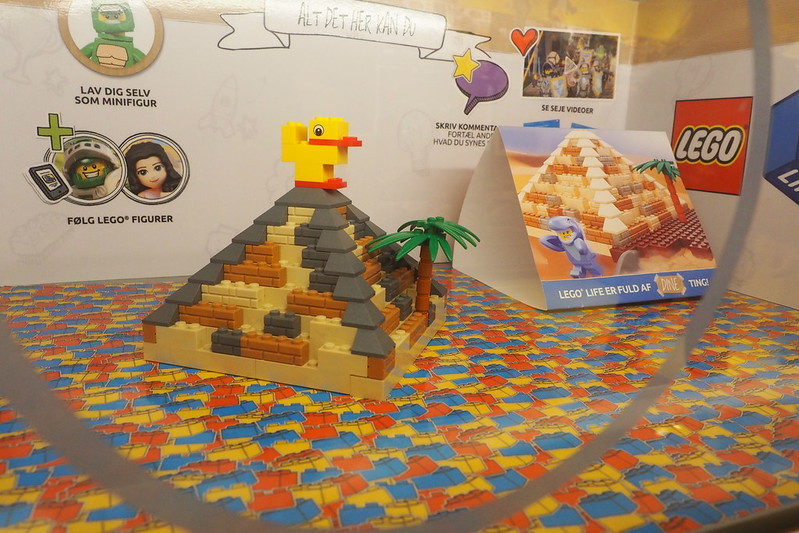 Another difference between the LEGO Brand Store and the LEGO Certified Store are the sale of polybags. In Singapore (and other parts of Asia), polybags are used as gift-with-purchases and never sold off the shelf which is a pity as they make really great introductory gifts to non-fans. 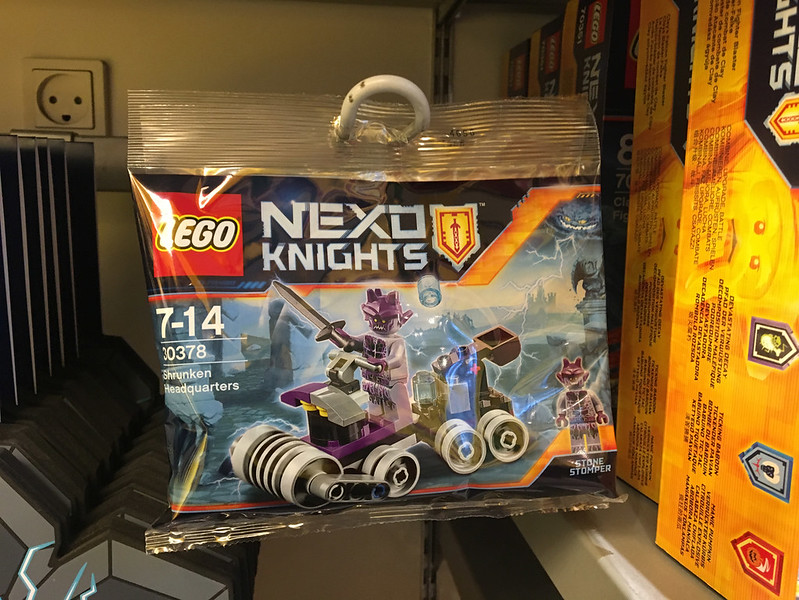 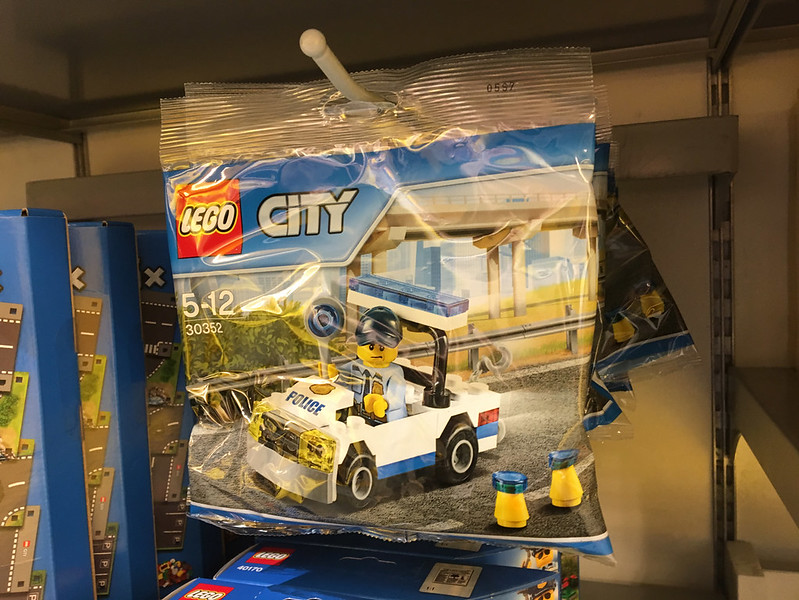 The Pick & Build (PAB) wall is fully stocked with 162 tubes that house a host of elements that we seldom see all at one place in Asia. 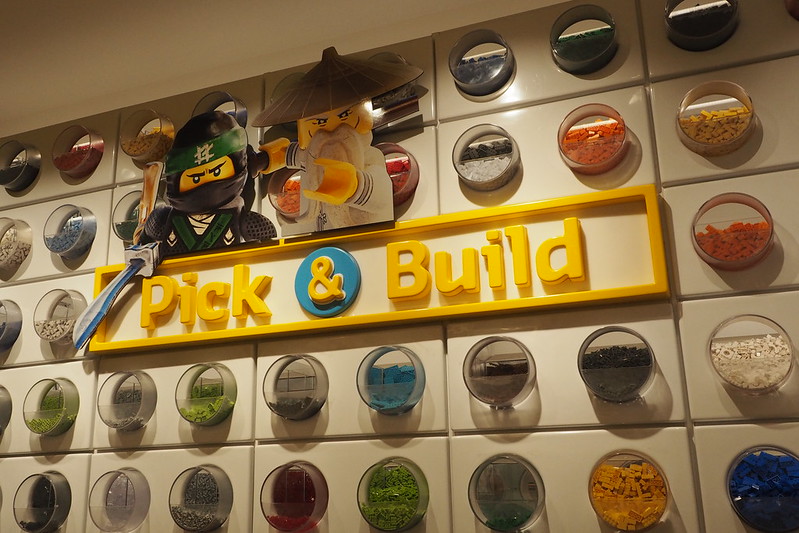 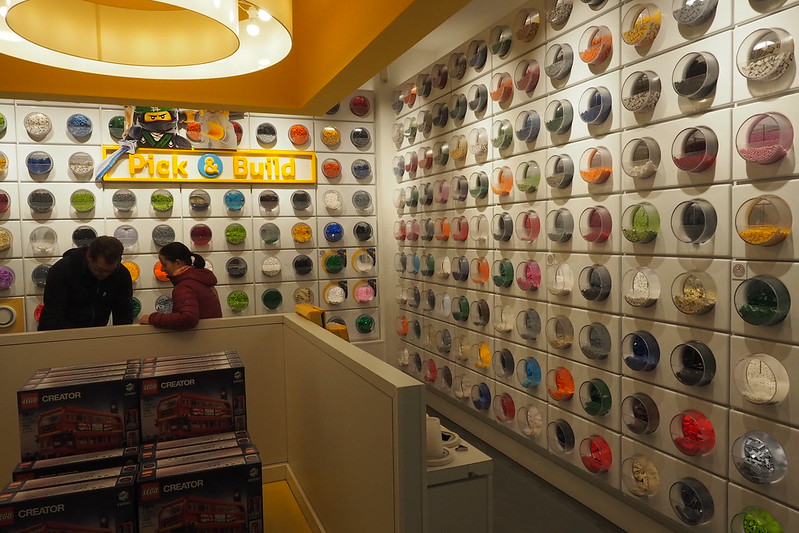 The small tub goes for 80kr (SGD$17.23) and the large tub is priced at 150kr (SGD$32.30) which is slightly cheaper than in Singapore just off the base price and don’t forget that you can claim the 20% sales tax when you leave. 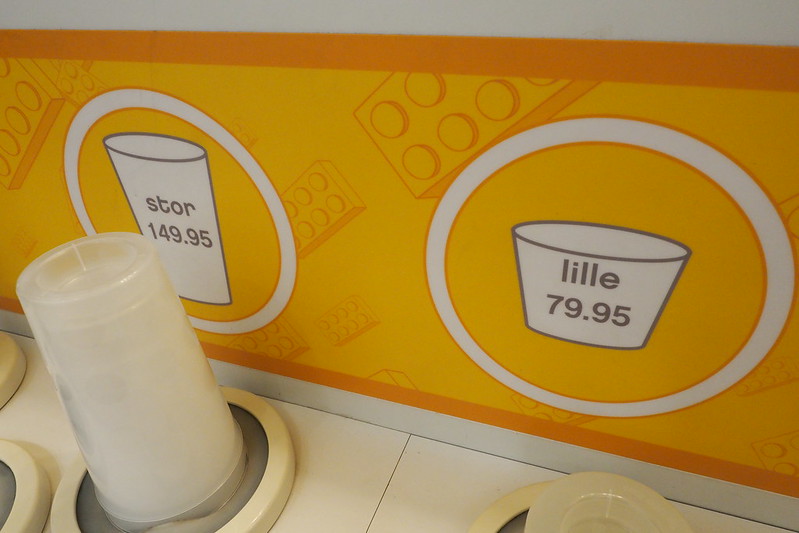 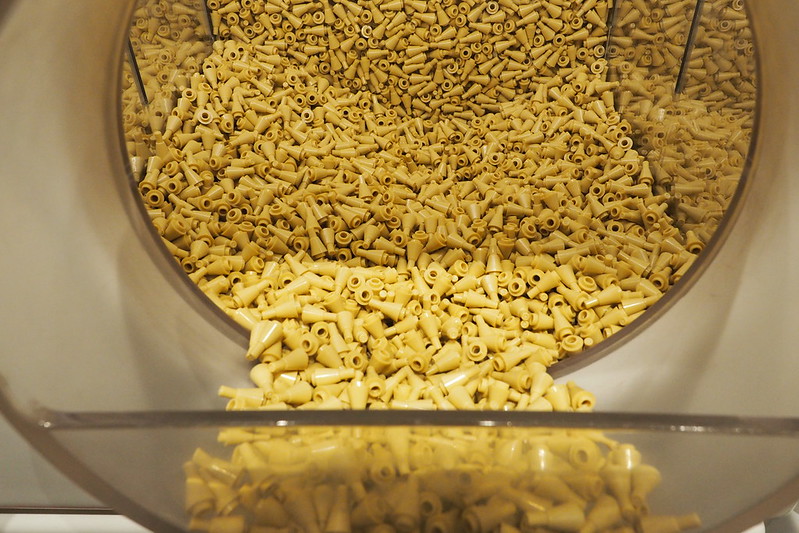 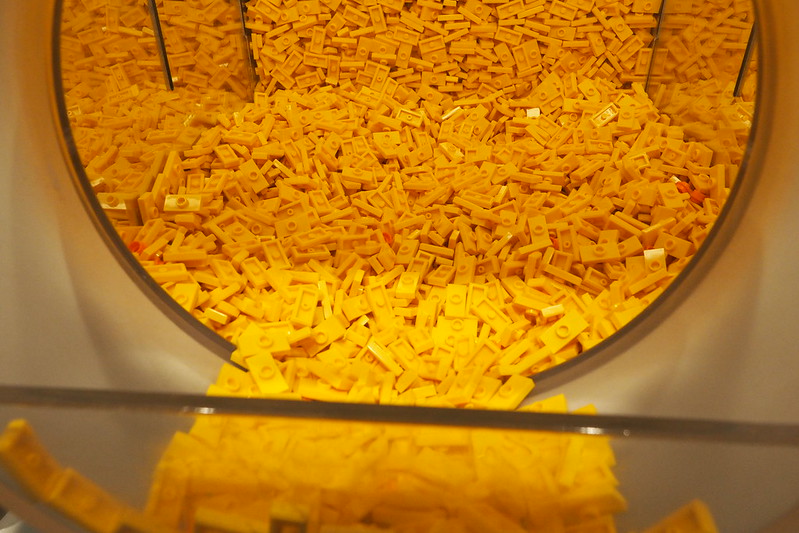 Another thing that I really love about the LEGO Brand Store are the promotions. As luck would have it, the promo for redeeming a LEGO NINJAGO® Kai’s Dojo Pod (5004916) with any purchase of a LEGO Ninjago item was still running and all I had to do to get one was to purchase a LEGO Ninjago Collectible Minifigure packet which cost 30kr (SGD$6). It is a minimum spend of SGD$60 on LEGO Ninjago products in Singapore to get one Dojo pod. 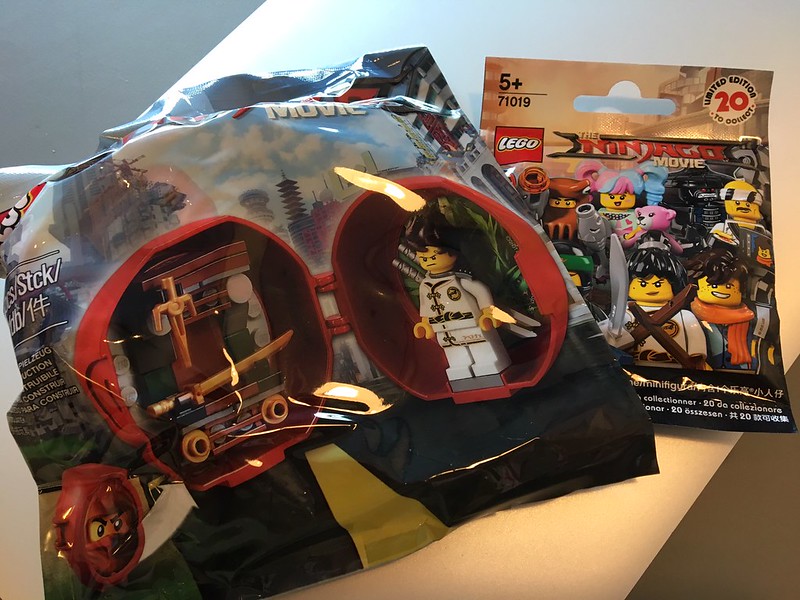 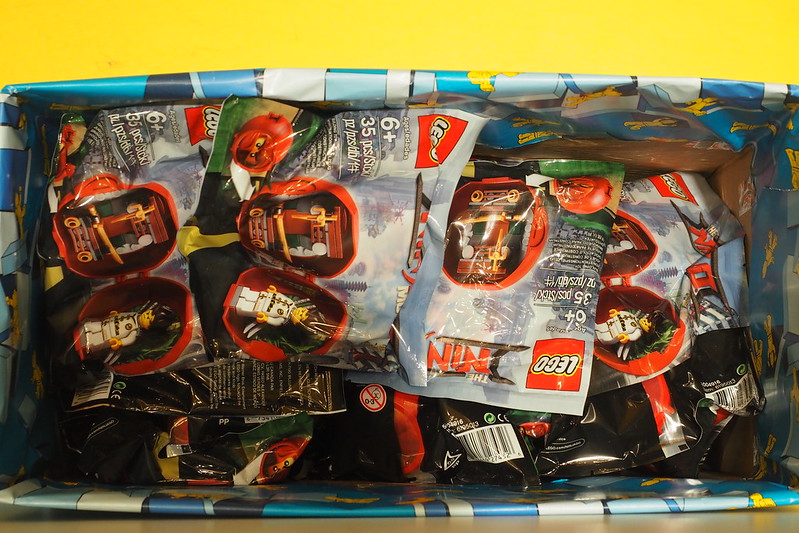 Don’t forget to get your LEGO Passport when you visit a LEGO Brand Store for the first time. It is a nice little travel ‘passport’ where you are able to collect stamps from various LEGO Brand Stores around the world. It is a neat little book that is free upon request that you can track the different LEGO Brand Stores you’ve visited on your travels. 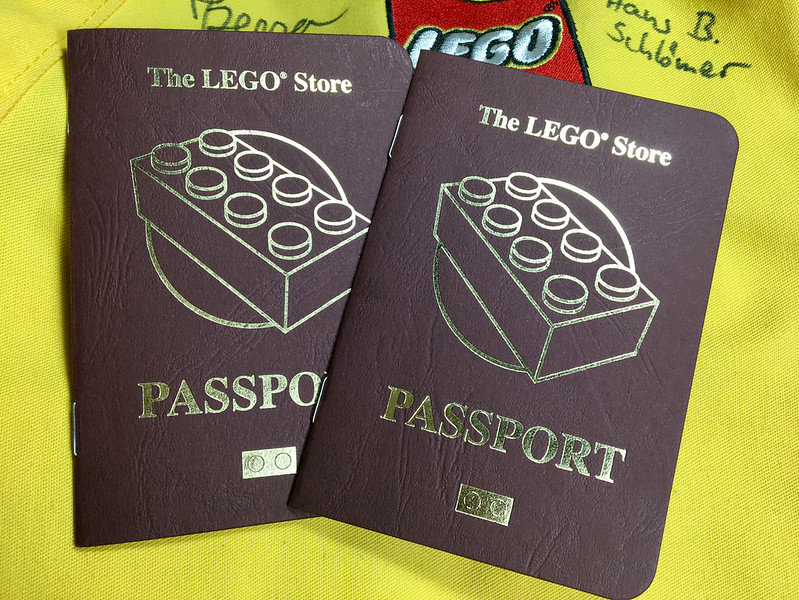 There is also your standard Build-A-Minifigure station with a range of torso, heads, hair pieces, leg assemblies and accessories to choose from. It is 59.90kr (SGD$10) for a pack of three minifigures which is actually significantly cheaper than in Singapore which is priced it at SGD$14.90. 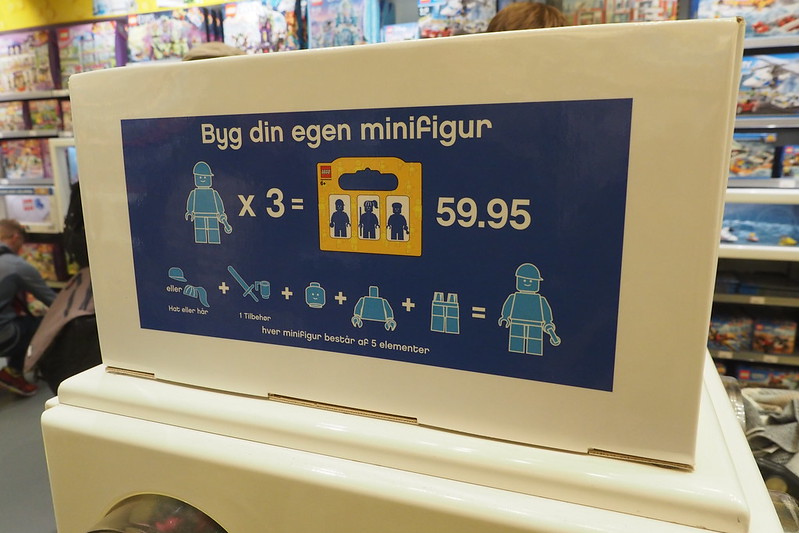 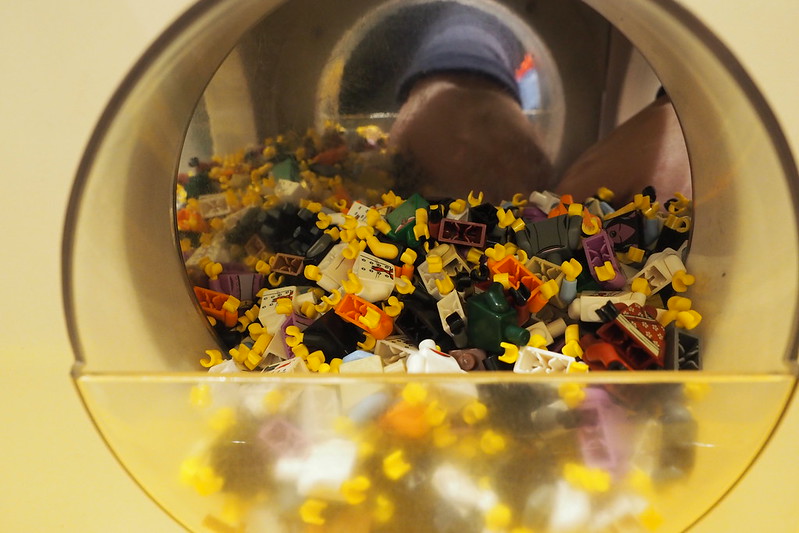 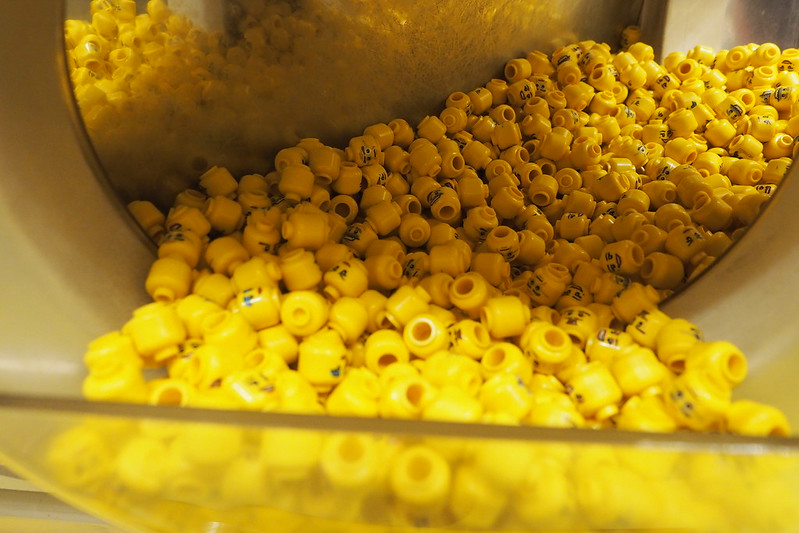 I have to say that the staff was really attentive to the needs of the customers around and the atmosphere was really relaxed and friendly.

As my first LEGO Brand Store experience outside of the United States, it was quite a memoriable one. Oh, and do check out the store front down the side alley as they also have a LEGO mural as part of the facade! 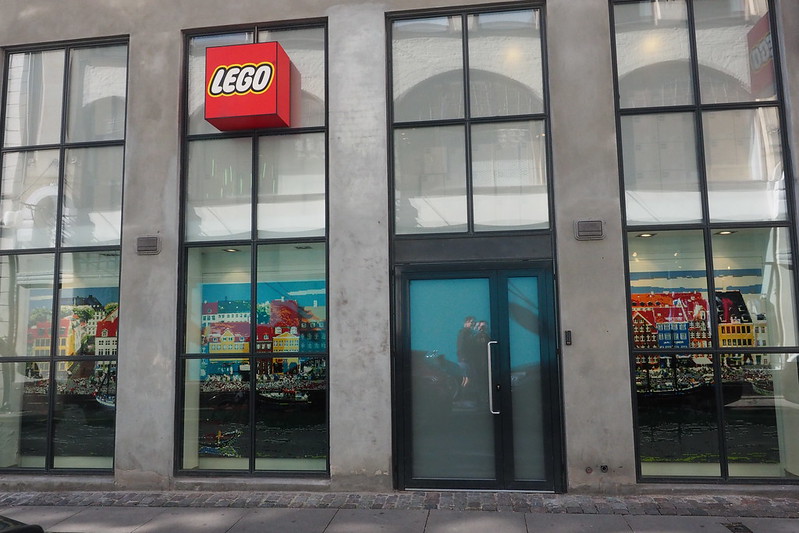 (Special thanks to Daniel and YiFang for entertaining my multitude of questions!)