The latest season for Netflix’s hit streaming series Stranger Things just a month away, we have the official images to the first ever LEGO/Netflix collaboration!

The LEGO Stranger Things: The Upside Down (75810) is not only a first for the streaming series, it is also definitely a first in terms of design. 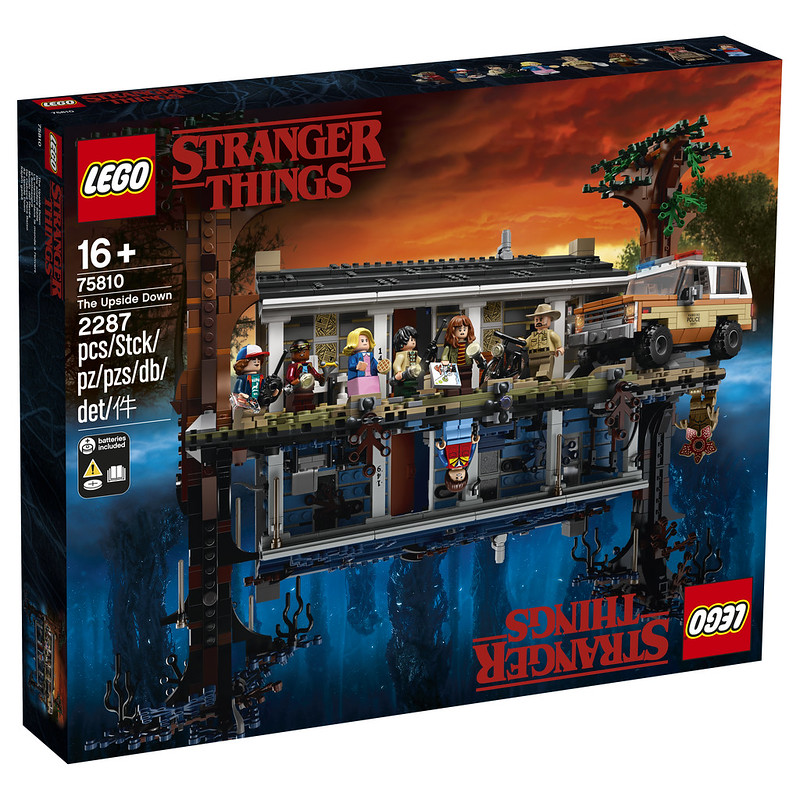 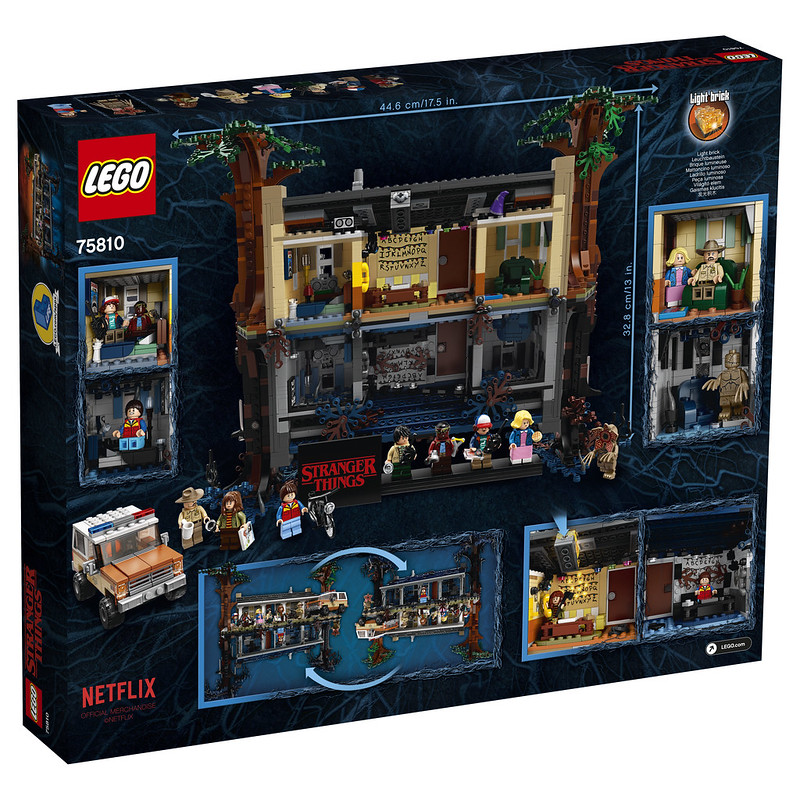 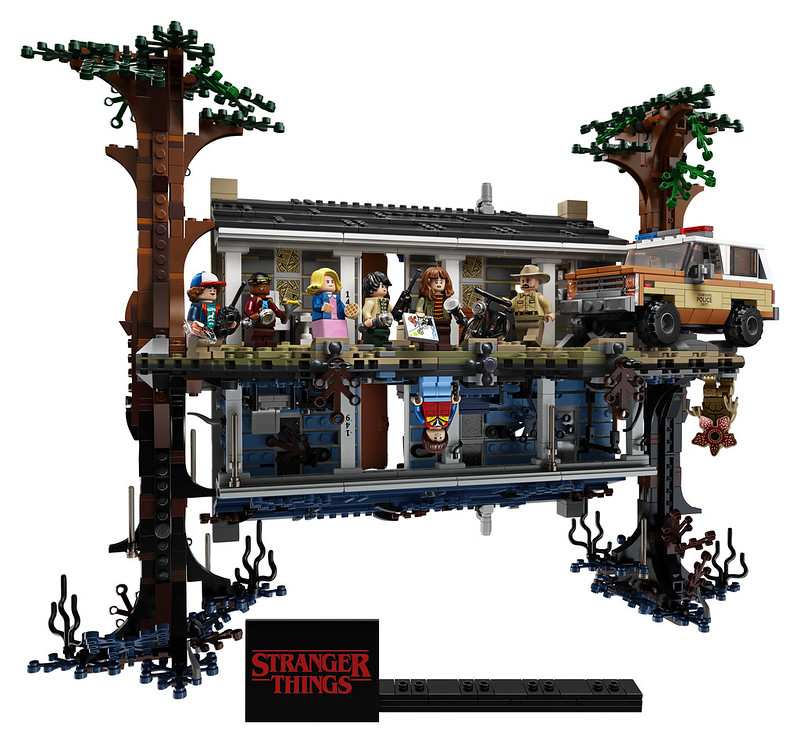 It features the Byer’s house in two forms, the reality in which they exist in and the Upside Down version which forms mirror images of each other when put together as a whole. 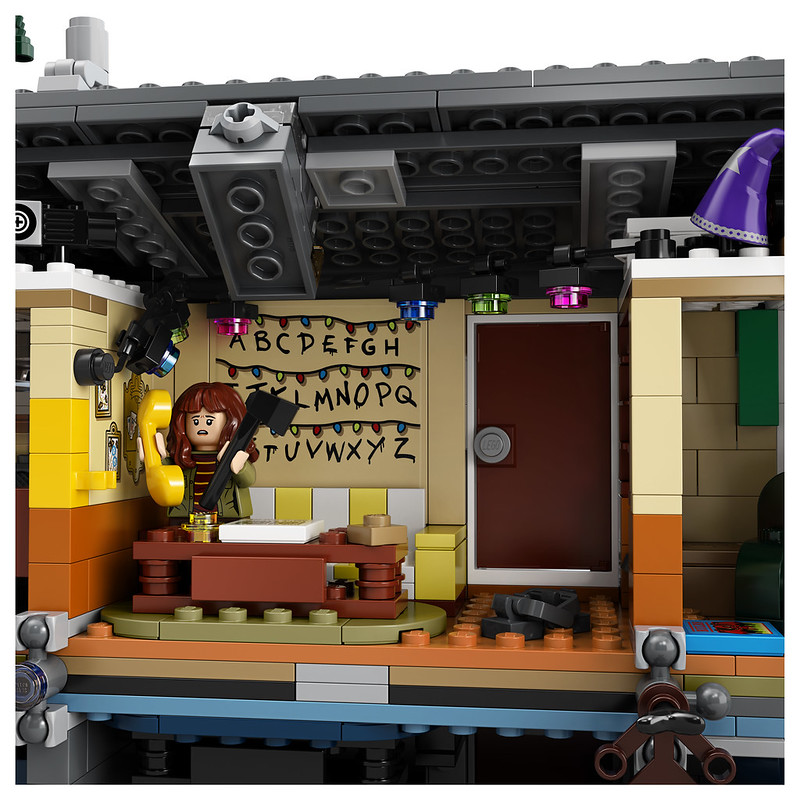 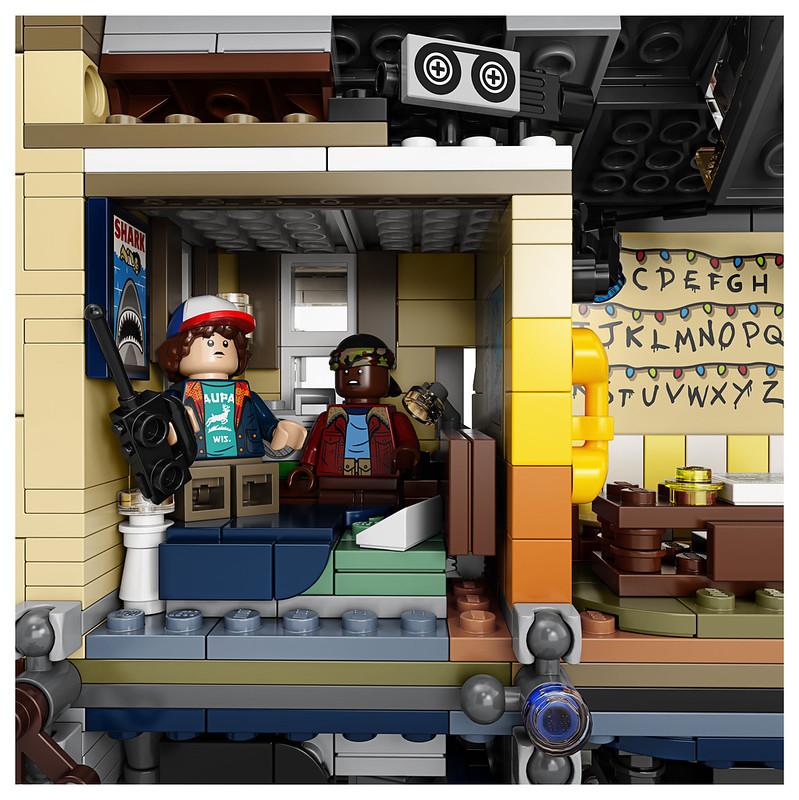 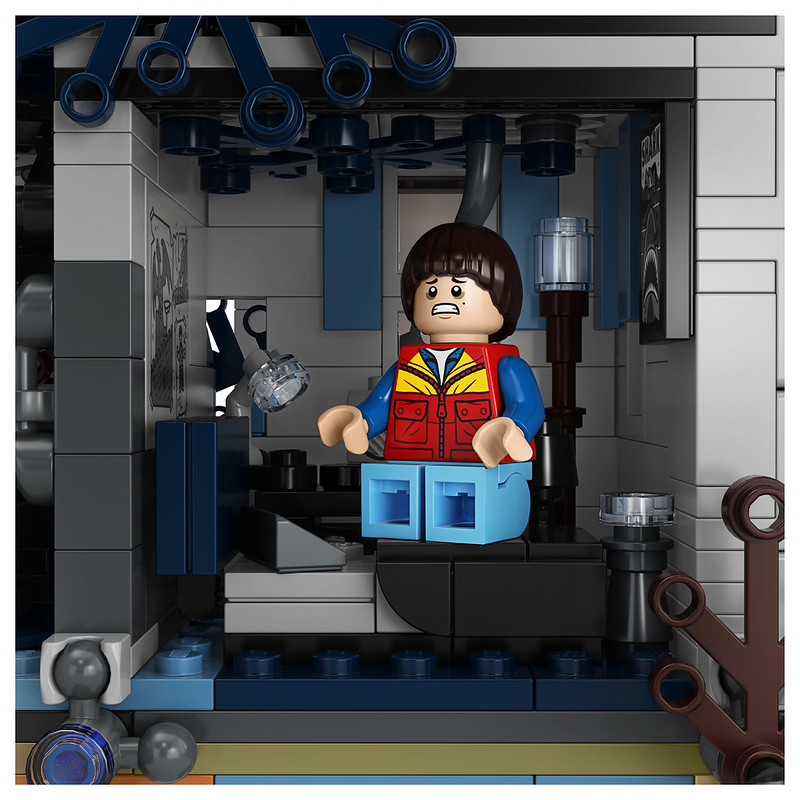 The brilliant part of the design is that it functions as a whole piece where the trees on either side of the house act as ‘stands’ for when you flip the build over. 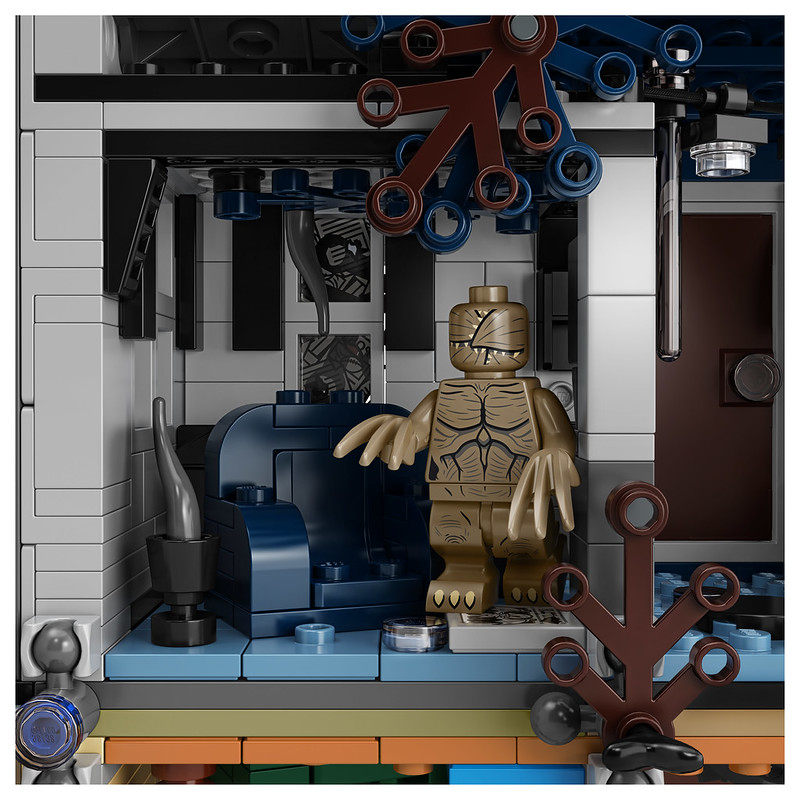 The set clocks in at 2287 pieces and includes eight  minifigures: Chief Hopper, Joyce Byers, Eleven, Mike, Lucas, Dustin, Will and the Demogorgon!

There is a special midnight launch on the 15th of May where VIP members are able to be the first to get their hands on the set and even get to meet LEGO Designer Justin Ramsden! 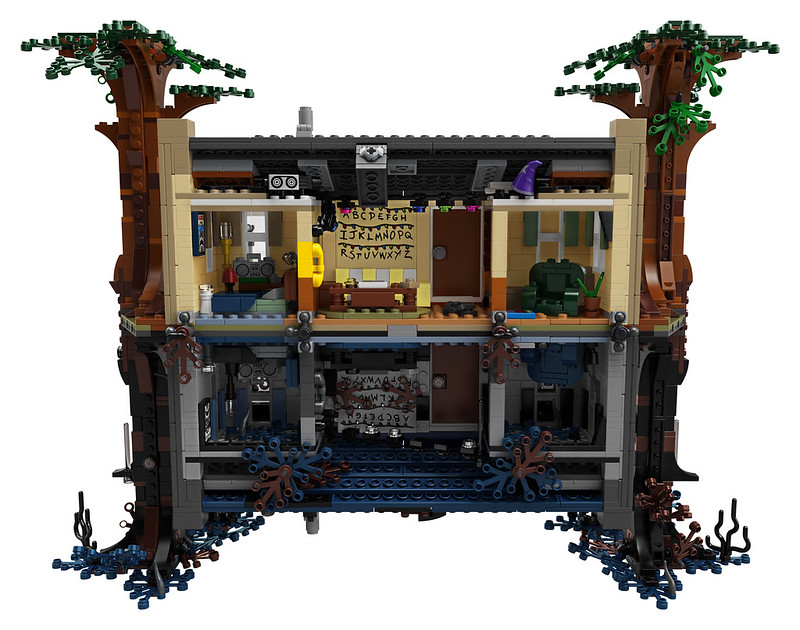 SOMETHING STRANGE IS GOING ON… – AS THE TOWN OF HAWKINS, INDIANA ARRIVES IN LEGO® BRICK FORM

[London, May 15th 2019] Something strange is happening in Hawkins, Indiana – but this time in LEGO® brick form, as the LEGO Group unveils its brand new set, LEGO Stranger Things: The Upside Down.

The first set, made in partnership between the LEGO Group and Netflix is a new build experience allowing fans of Stranger Things and LEGO bricks to explore the Byers’ house and the supernatural world of the Upside Down in LEGO brick form, released May 15, 2019.

The brand-new set was unveiled at the LEGO Store Leicester Square, London with a special midnight opening experience. Visitors were greeted with the supernatural sight of the Mind Flayer illuminating the front of the store and a spooky LEGO brick recreation of Will Byers’ bike abandoned outside. Once inside the store, guests took their place in the Byers’ living room for a picture with the famous alphabet wall from season one, LEGO senior designer Justin Ramsden was on hand to sign sets and chat with fans. Guests were even able to take part in a make and take activity, creating a mini Castle Byers to take home

The set was launched simultaneously in the LEGO Store in the Flatiron District of New York City. The launch was celebrated with a late-night event, where guests took pictures in front of a LEGO brick-built alphabet wall and a replica of the Byers’ living room and helped a LEGO Master Builder in a live build of the set.

The set features eight Stranger Things characters recreated in LEGO minifigure form, including Chief Hopper, Joyce Byers, Eleven, Mike, Lucas and Dustin as they try to save Will from a minifigure version of the Demogorgon!

The set is full of authentic details from the award-winning Netflix original show, including the alphabet wall complete with a light-up function, a buildable version of Chief Hopper’s police cruiser and the phone in the Byers’ living room, Step into Will’s bedroom with a buildable bed and stickered elements of the posters decorating Will’s room. There are small Easter eggs to be discovered throughout the house including a ‘Will the Wise drawing’ and a picture of the iconic Mind Flayer hidden in the attic.

This Stranger Things collectible includes 2,287 pieces and a whole host of accessories for each of the characters including Hopper’s coffee cup, Eleven’s waffle and Mike’s flashlight to help you solve the mystery of his missing friend.

This is the ultimate collectible for Stranger Things and LEGO fans alike, allowing them to flip between the Byers’ house in Hawkins, Indiana and the mysterious Upside Down world. This is the perfect set to build ahead of Stranger Things Series three landing July 4, 2019.

LEGO Stranger Things: The Upside Down comes with two sets of building instructions allowing fans to play & display both sides of this unique upside-down set. The upside-down version of the model being a mirror image of its real-world counterpart with a dilapidated look, complete with dark vines and murky colours in keeping with the fan-favourite Netflix series.

Jamie Berard, Stranger Things Design Lead at the LEGO Group said “It’s amazing to see the collaboration between the LEGO Group and Netflix come to life. The Stranger Things universe offers us a wonderful opportunity to be playful with the bricks and allow fans to get lost in the mysterious world of the Upside Down. The design team has created an impressive model that is not only fun to build but also offers lots of details and ‘Easter eggs’ that should delight fans of the series.”

LEGO Stranger Things: The Upside Down is available directly from LEGO stores and shop.LEGO.com/strangerthings from 15th May 2019

One response to “LEGO Stranger Things: The Upside Down (75810) Official Announcement!”