The RMS Titanic was a British passenger liner operated by the White Star Line whose has inspired a myriad of books, movies, television series and now the longest LEGO set ever made.

The LEGO Titanic (10294) actually measures 135cm from bow to stern which is already 25cm more than the LEGO Star Wars Imperial Star Destroyer (75252) which measures only 110cm in length.

The scale of this LEGO Titanic model is 1:200 and it is packed with a tonne of details like a micro-scale replica of the First class grand staircase, dining saloon and engine room.

I’m also happy to report that there are no stickers in this set as all the graphics are printed including the flags. There is also a buildable plaque with the letters “TITANIC” printed on individual 2×2 round tiles.

The interesting bit about the build is that it is constructed in modules when separated, allows of viewing the cross sections at different points along the length of the ship. 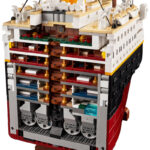 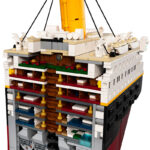 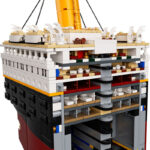 I think the metric of piece count for “The Largest LEGO Set” is a little outdated so I’ll just use the term, “set with the highest piece count” from here on out. The LEGO Titanic will be available for pre-order on November 1st and will be on sale on the 8th of November at all LEGO Brand and Certified Stores.

I’m a huge fan of the construction marvel that is the Titanic and I would love to get one but the price point is inherently prohibitive, not to mention the amount of space I need to set aside to display the whole model.

You can check out the lifestyle gallery below:

7 OCTOBER 2021: The LEGO Group has revealed an authentic replica of the most famous ship of all time, the RMS Titanic, which has fascinated generations for over a century.  Fans can now recreate the luxury liner in detailed LEGO® brick form, 110 years since it was launched in Belfast in 1911.

The LEGO Titanic is one of the longest and largest LEGO models to date, made up of 9,090 pieces, making it a truly immersive building challenge for LEGO fans and budding historians alike.

As well as its sheer size, the Titanic was known for its unrivalled grandeur, which has been faithfully captured in the set. Beneath the unmistakable exterior of the LEGO Titanic, there are several interior rooms to explore including the First-Class grand staircase which spans six decks and the Jacobean-style dining saloon which was located on the ship’s D deck.

Of course, the Titanic was also renowned for its unparalleled speed, outclassing other ships of the era. In the lower decks of the LEGO Titanic, fans will find a replica of the state-of-the-art engine room.

Mike Psiaki, design master at the LEGO Group commented: “At the time of its launch the Titanic was the pinnacle of nautical engineering, the largest moving vehicle ever created. It has been an incredible journey to recreate this iconic vessel from LEGO bricks, using blueprints created over a century ago.

“Designing the LEGO Titanic with such a focus on immense detail and scale, but also accuracy, has allowed us to create one of the most challenging building experiences to date.  We know brick builders and ship enthusiasts of all ages will love building the set and displaying it in their homes.”

At over 1.3m long, the LEGO Titanic set is perfect for display and comes with a unique plaque with the ship’s name. This impressive set is available for pre-order from 1st November and general sale from 8th November from LEGO Stores and www.LEGO.com/titanic at the recommended retail price of €629.99 / $629.99 / £535.69.

Accurate replica of the RMS Titanic, complete with plaque and display stand