The LEGO Dragon Dance (80102) set is one of the more unique sets that I’ve ever come across as combines both Asian traditions and LEGO ingenuity in one very affordable set!

It features a traditional Chinese Dragon Dance scene but unlike the LEGO Chinese New Year’s Eve Dinner (80101) set, this one actually moves! 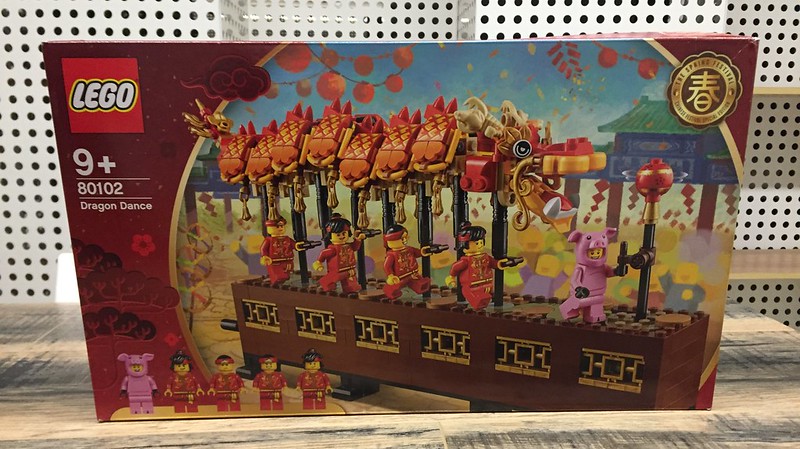 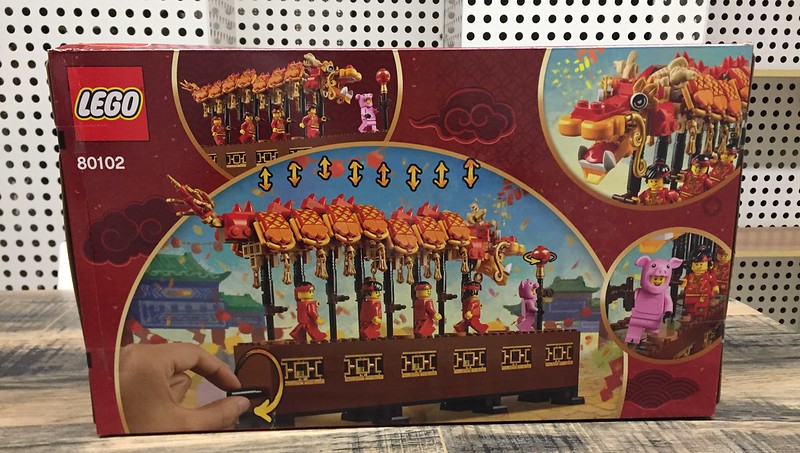 The set’s 480 pieces is separated in four numbered bags although bag number one has a sub-bag to hold the smaller pieces. 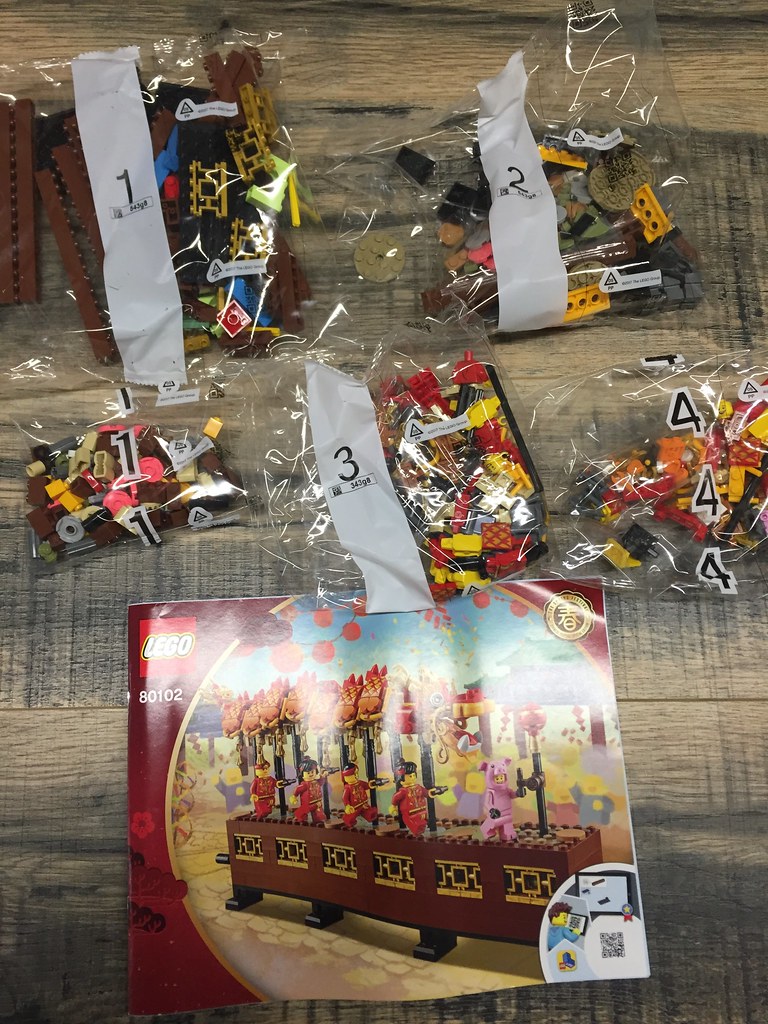 There is also the instruction booklet and I’m noticing a significant lack of a sticker sheet so I’m happy to report that there are no adhesives for this set as everything is printed!

This would be the first time we would encounter the teal brick separator which is included in this set. I’m told that this colour brick separator will be available in other future releases from LEGO. 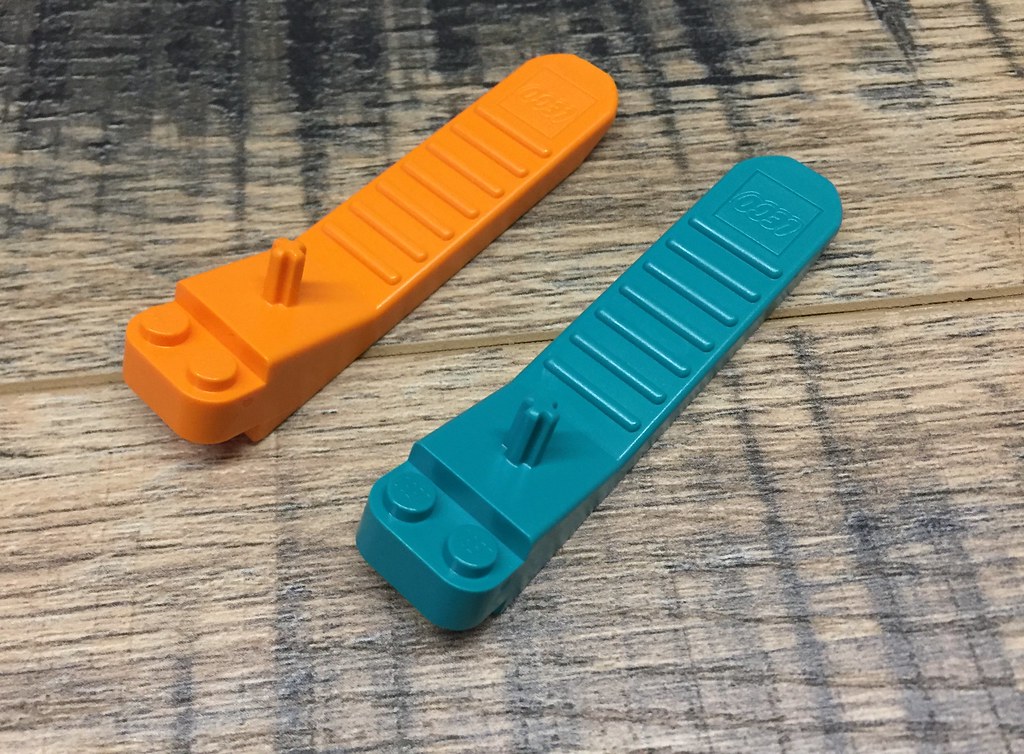 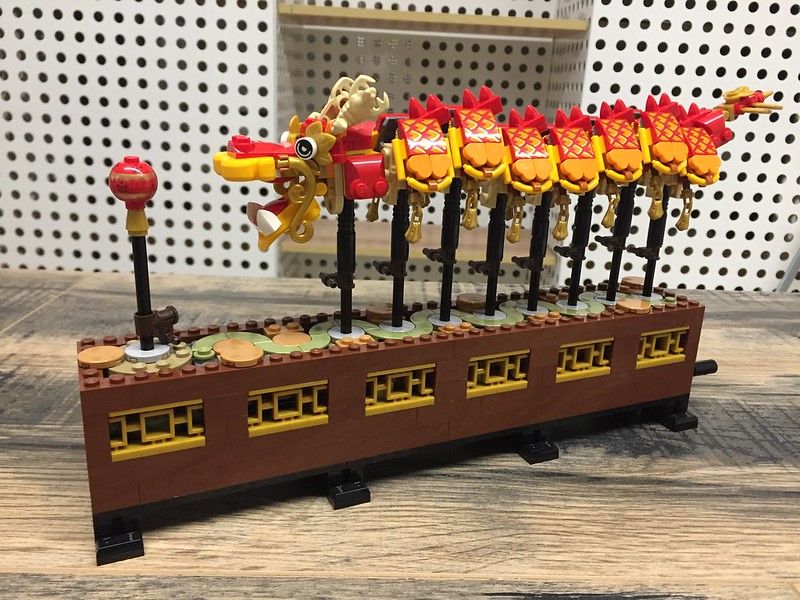 The main bulk of the build revolves around the mechanism that allows the brick-built dragon to oscillate as well as to rotate the ball that it is trying to ‘chase’. 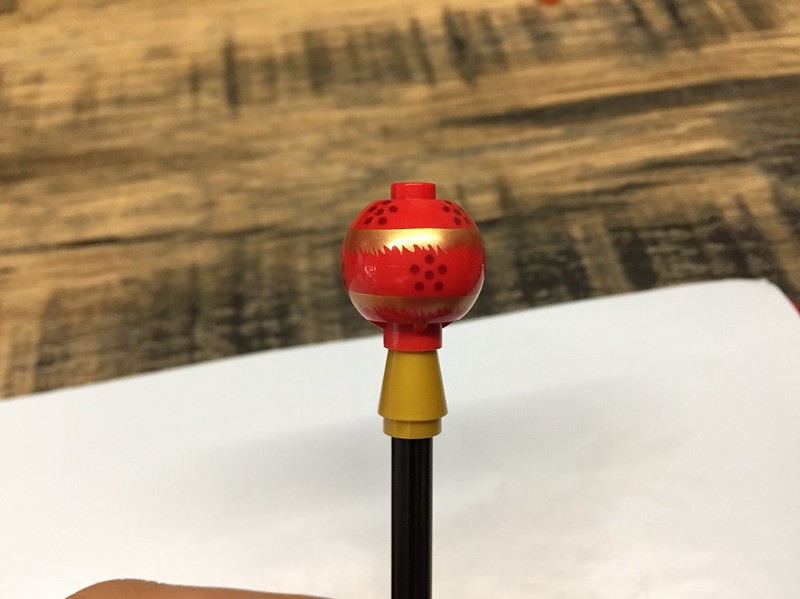 There is a central shaft with the 1×2 Technic Lift Arm placed at 90 degree angles from each other at equal intervals.

At one end is a pari of 12 tooth gears to change the rotational direction for the ‘ball’ so that it can spin on the spot while the other parts oscillate with each turn of the crank. 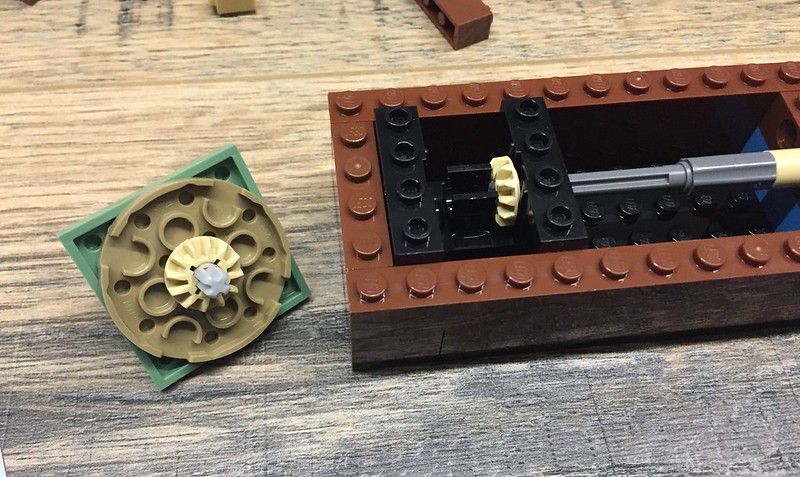 Needless to say that this will require a little bit of LEGO know-how to complete as there are some advance building techniques that a novice may not have been exposed to. 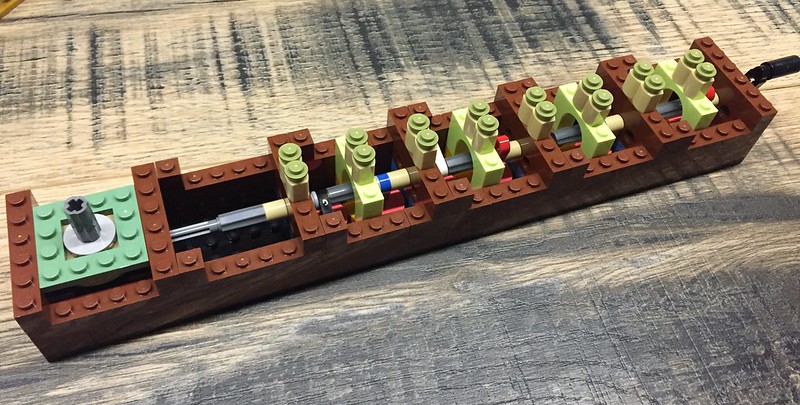 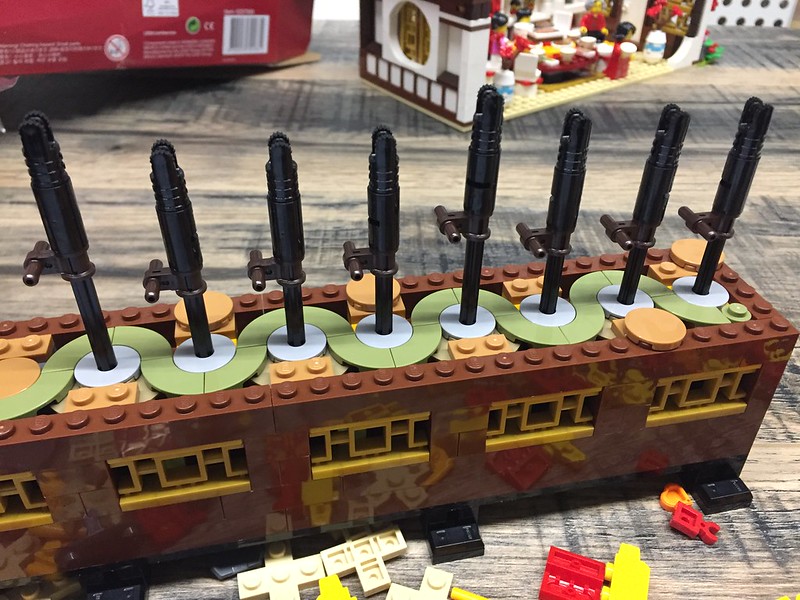 Having said that, this is also a decent set to introduce you to the world of LEGO Technic that adds another layer of movement to what would have been a static model.

There are five minifigures that come with this set with four of them sporting new torso designs for their dragon dance uniforms.

As next year will be the year of the pig, there is a Pig Suit Guy from Collector Minifigure Series 12. 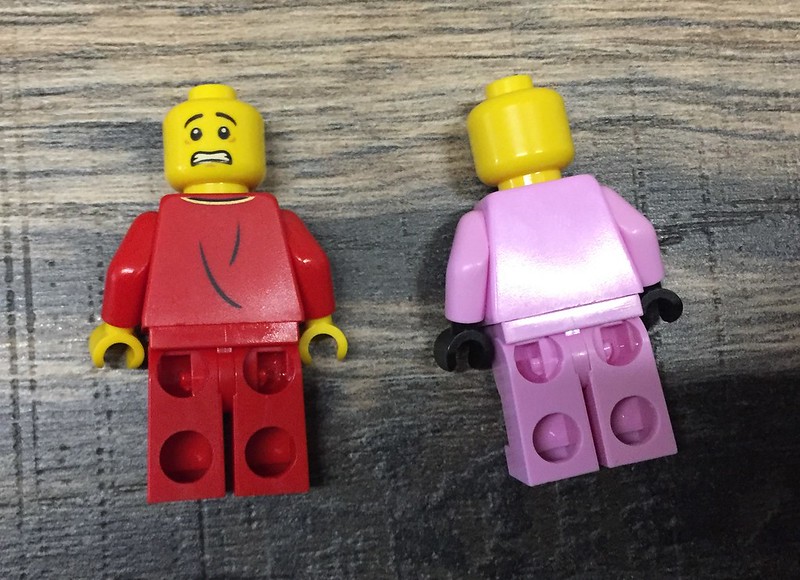 The headpieces are the usual LEGO City ones and their hairpieces are new colour variants of those we saw from the LEGO Ninjago Movie wave of minifigures.

Included in this set is the orange ‘heart’ tile which is used for the scales of the dragon. I do believe that we will see more of that in the LEGO Movie 2: The Second Part sets although not in this colour. 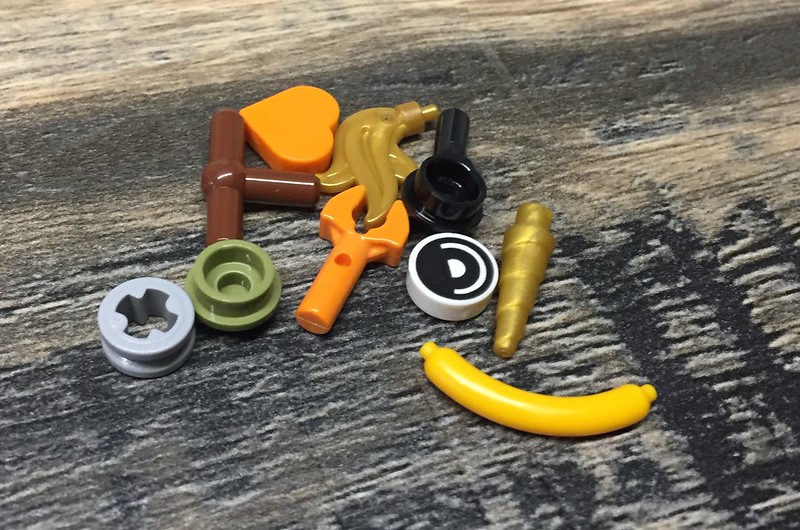 There is also a new dark yellow sausage piece as well as a printed 2×2 curve slope for the main body of the dragon. 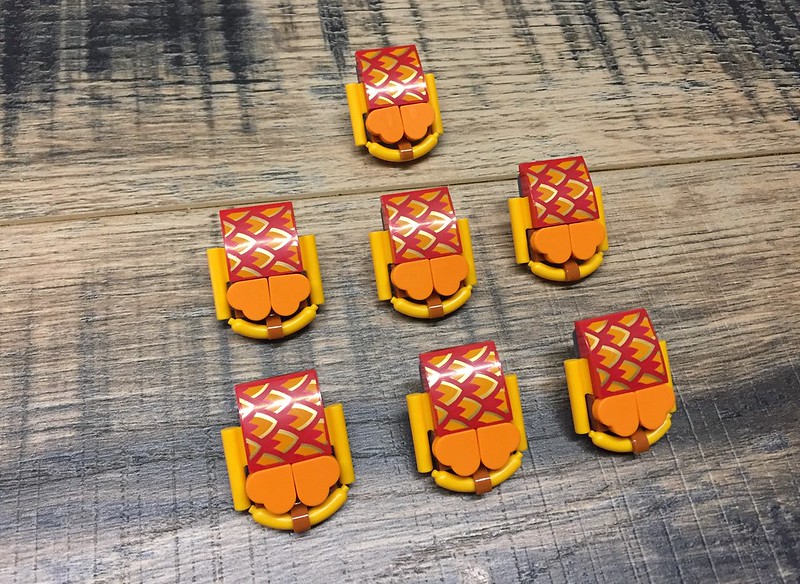 And not to mention the ball piece with the print that goes all the way around that was highlighted earlier. 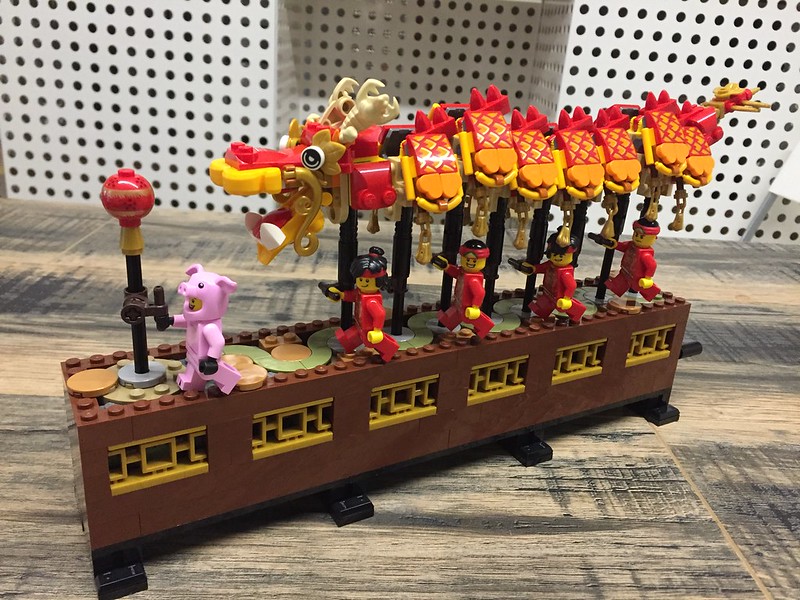 I’m actually quite glad that LEGO is adding this layer of motion to their sets, first with LEGO Forma and now with the LEGO Dragon Dance (80102).

This set is something that I would have expected JK Brickworks to come up with so it is quite comforting to see LEGO endorsing this type of kinetic design. 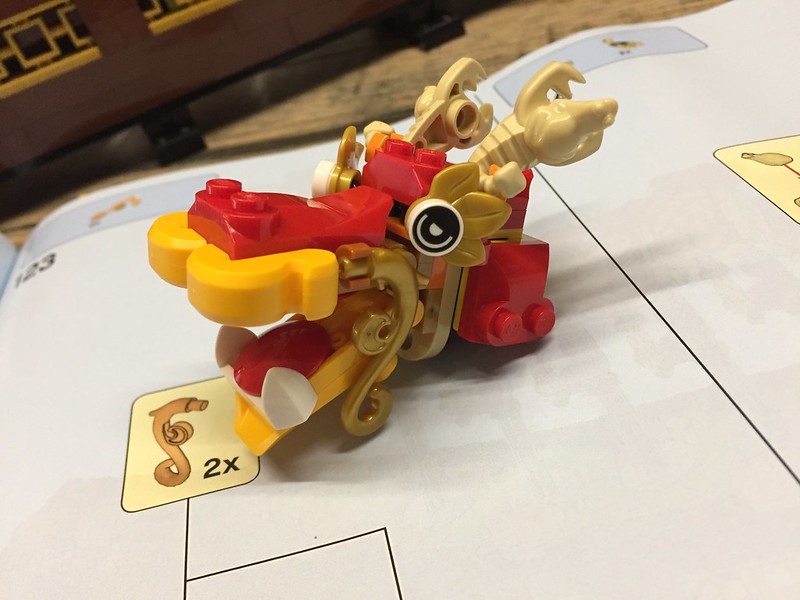 I have to admit that even after years of designing dragons for various themes like Ninjago and Elves, the LEGO Designers are still able to come up with ingenious ways to create a dragon head.

The printed curve slopes coupled with the new 1×1 heart tile and yellow sausage element is perfect for the dragon’s scale plating.

The recommended retail price for this set is SGD$84.90 / 元599 which brings the price per piece to be approximately 17¢ and it drops to 14¢ when the local stores have their 20% discount sales.

Definitely worth it even without the discount as there are a bunch of unique elements and multiples of brand new ones like the 1×1 heart tile.

Not only does it celebrate the Lunar New Year, it also incorporates kinetics into the model which hasn’t been done for a set this size.

(Special thanks to Wooden Duck for awesome photos!)