With the New York Comic Con just days away, LEGO has released the official photos of the remaining three DC Super Hero Girls Sets that will make their debut at the convention.

These three sets will round out the remaining mini-dolls of Wonder Woman, Lashina and Bumblebee which is a pretty decent selection for this initial wave.

Personally I would have loved a Selina Kyle/Catwoman Mini doll but I guess they have to reserve some of the cool characters for the next wave.

Here is what we have so far:

Join in the action-packed LEGO® DC Super Hero Girls™ world as Supergirls dog Krypto™ faces Lashina™and the blue Kryptomite™. This great set features a Lashina mini-doll figure, Lashinas tank with a stud shooter and space in the back for Krypto, plus Kryptos house with defense shield and a catapult.

-Includes Krypto and a confused blue Kryptomite. Includes a Lashina™ mini-doll figure, plus Krypto™ figure and a confused blue Kryptomite™.
-Features a tank with stud shooter and a cage in the back with removable cover to hold Krypto™.
-Also includes a doghouse with shield that opens, fire hydrant and a catapult.
-Fire the yellow ball element from Kryptos catapult at Lashinas tank.
-Capture Krypto™ with Lashinas whip and put him in the back of the tank.
-Break Krypto™ out of the tank to free him.
-Accessory elements include Lashinas whip, a yellow ball element, stud, Supergirls phone and a dog bone.
-This set offers an age-appropriate build and play experience for ages 7-12.
-Check out the 41230 Batgirl™ Batjet Chase for some high-flying Super Hero fun!
-Cute but evil Kryptomites are included in every LEGO® DC Super Hero Girls™ set.
-Lashina’s tank measures over 1” (4cm) high, 3” (10cm) long and 1” (5cm) wide.
-Kryptos doghouse measures over 1” (5cm) high, 2” (6cm) wide and 1” (3cm) deep.
-Price: USD$14.99 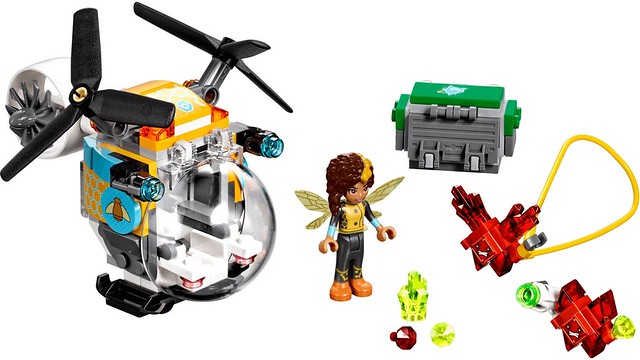 -Features a helicopter with opening cockpit, spinning rotors, zipline, two stud shooters and storage space in the back to hold the crystals.
-Also includes a dumpster to hold the stolen crystals.
-Load the crystals in the back of the helicopter and take off.
-Fire the helicopters stud shooters at the Kryptomites.
-Shake the Kryptomite™ off the helicopters zipline and recover the stolen crystals from the dumpster.
-Includes a small stud shooter for the Kryptomites.
-Accessory elements include four studs and three crystal elements.
-This set offers an age-appropriate build and play experience for ages 7-12.
-Join the other teens at 41232 Super Hero High School to learn more about being a Super Hero!
-Cute but evil Kryptomites are included in every LEGO® DC Super Hero Girls™ set.
-Bumblebees helicopter measures over 2” (7cm) high, 3” (10cm) long and 3” (10cm) wide.
-Dumpster measures over 1” (4cm) wide, 1” (3cm) deep and under 1” (2cm) high.
-Price: USD$14.99 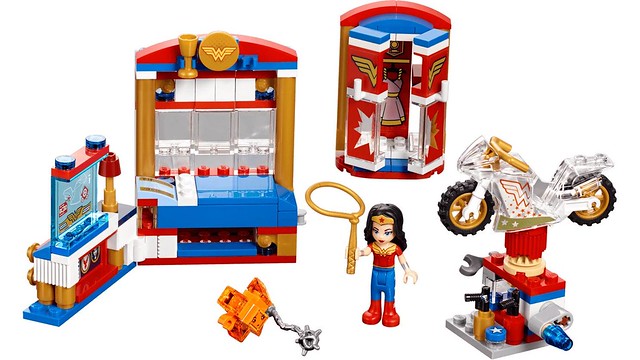 Be part of the action-packed LEGO® DC Super Hero Girls™ world as Wonder Woman™ protects her Golden Lasso from the Kryptomite™. This great set features a Wonder Woman mini-doll figure, dorm room with an opening window, bed with a secret drawer/screen, separate opening wardrobe and workstation, plus an invisible motorbike, tool/paint and a suspicious orange Kryptomite.

-Includes a Wonder Woman™ mini-doll figure, plus a suspicious orange Kryptomite™.
-Features a bed with opening window and space for a trophy above and storage space belowfor a drawer/screen, plus an opening wardrobe.
-Also includes Wonder Womans invisible motorbike, plus a workstation with a rotating platform for the motorbike.
-Set the invisible motorbike on the workstations rotating platform.
-Sneak the Kryptomite™ through the window and into the wardrobe to steal the Golden Lasso.
-Close the doors and capture the Kryptomite™ in the wardrobe.
-Accessory elements include Wonder Womans Golden Lasso, a wrench, two spray paint cans, trophy and a tub of wax polish for the bike.
-This set offers an age-appropriate build and play experience for ages 7-12.
-Connect with 41232 Super Hero High School or join other Dorm Room sets to expand your Super Hero play even more!
-Cute but evil Kryptomites are included in every LEGO® DC Super Hero Girls™ set.
-Bed, wardrobe and workstation together measure over 3” (9cm) high, 6” (17cm) wide and 1”(3cm) deep.
-Motorbike workstation measures over 1” (4cm) high, 1” (3cm) wide and 1” (3cm) deep.
-Invisible motorbike measures over 1” (3cm) high, 2” (6cm) long and under 1” (2cm) wide.
-Price: USD$19.99

(Via The Brick Fan)