When LEGO announced the LEGO Creator Old Trafford – Manchester United (10272) set, I was a bit puzzled why there weren’t any minifigures packaged with it.

It was only later that I found out about the “gift with purchase” promotion to get a set of minifigures of the “United Trinity” when you buy it on launch day.

The United Trinity is a trio of Manchester United football players by the name of George Best, Denis Law and Sir Bobby Charlton who were instrumental in propelling their club to be the first ever English team to win the European Cup in 1968. 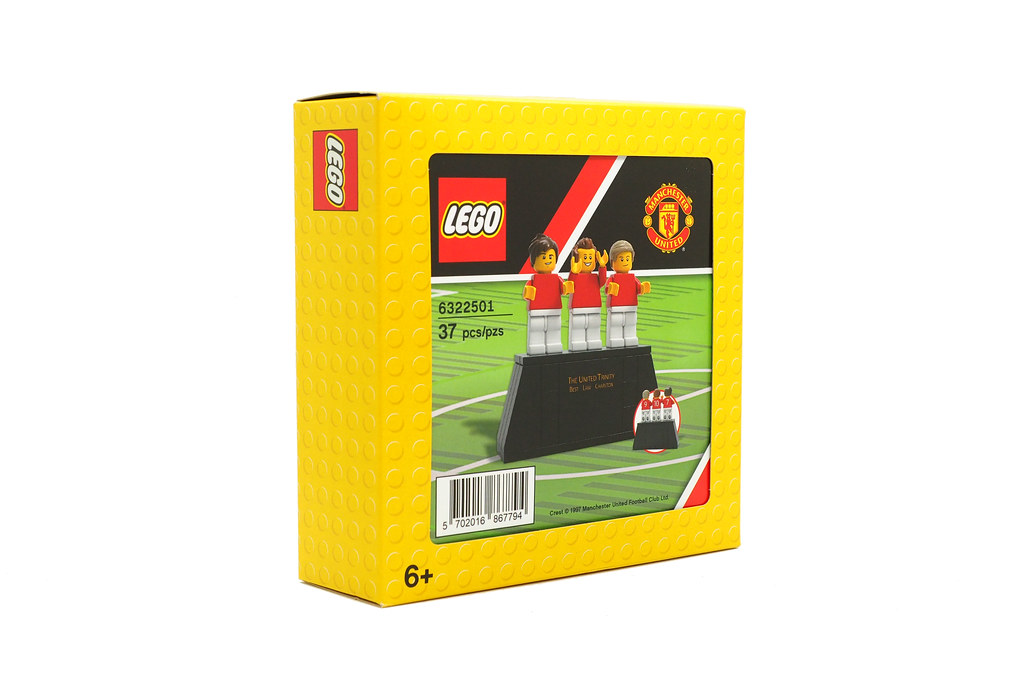 This would be the first time I’m encountering this type of packaging for a gift with purchase. It is a regular folding carton box but with a pocket in the front for the instruction insert. 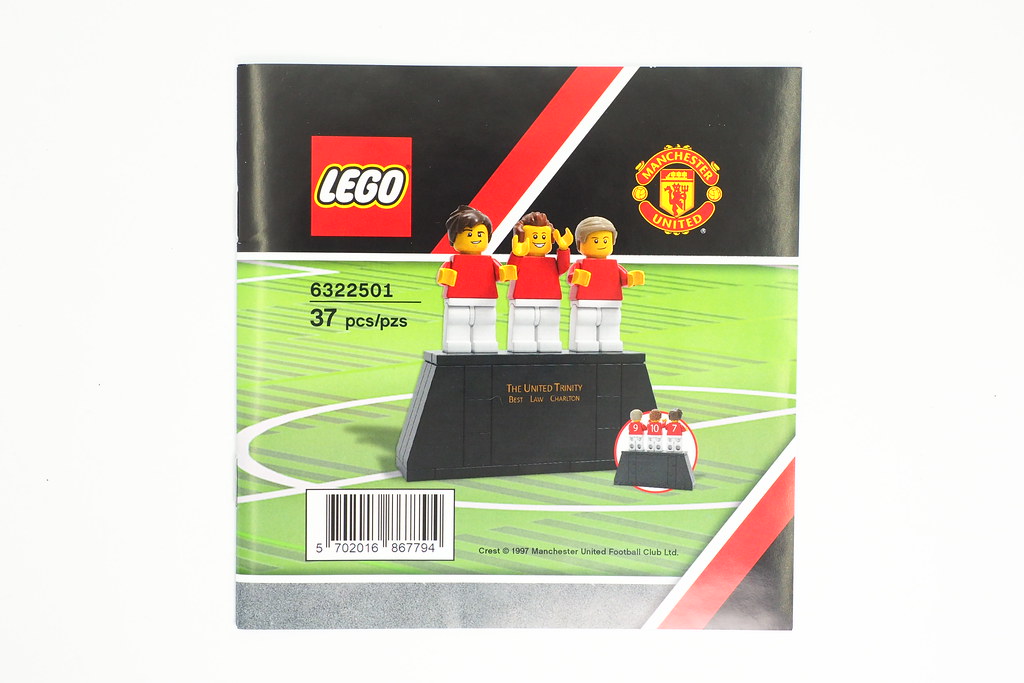 Essentially, the cover of the instruction booklet doubles up as the front box art which I have never seen before in a LEGO set. The 37pcs are packed in a zip-lock bag instead of a vacuum sealed packet. 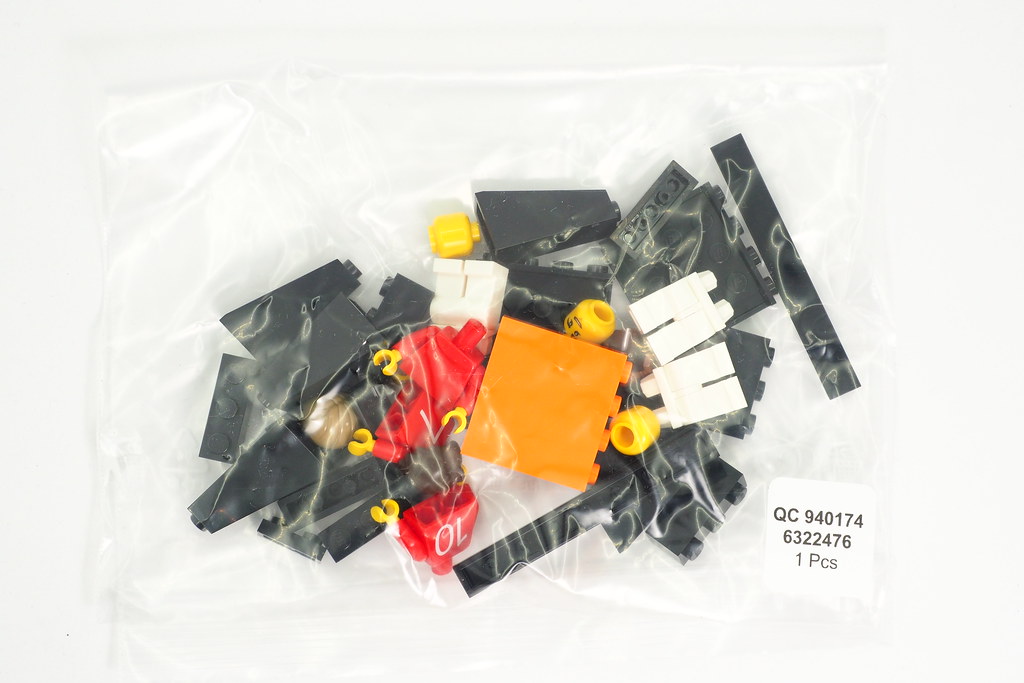 This reminds me more of a gift with purchase that was produced by a local business unit rather than one from LEGO themselves as this should have been a polybag instead of a ‘boxed’ set considering the low piece count.

The trio of minifigures that is included in the gift with purchase do somewhat resemble their real life counter parts.

Denis Law’s minifigure comes with a widow’s peak hair piece and a head piece with two expressions. I’m not sure if the second expression was a commentary on Manchester United’s performance at the tables this season. 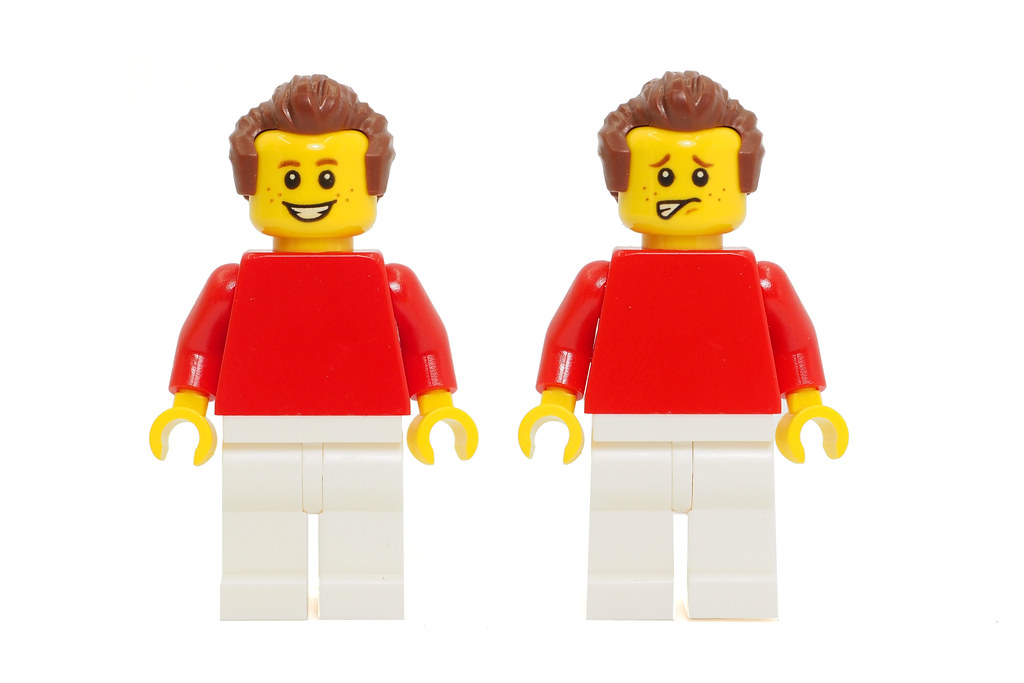 Sir Bobby Charlton hair piece is probably the closest that you could get to his receding hairline. 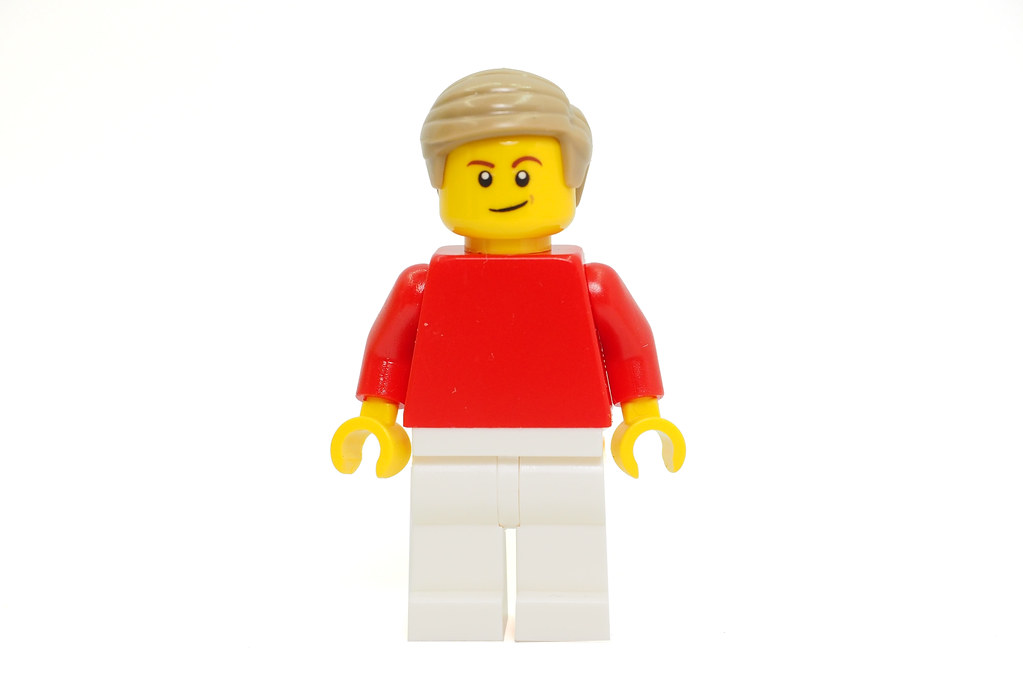 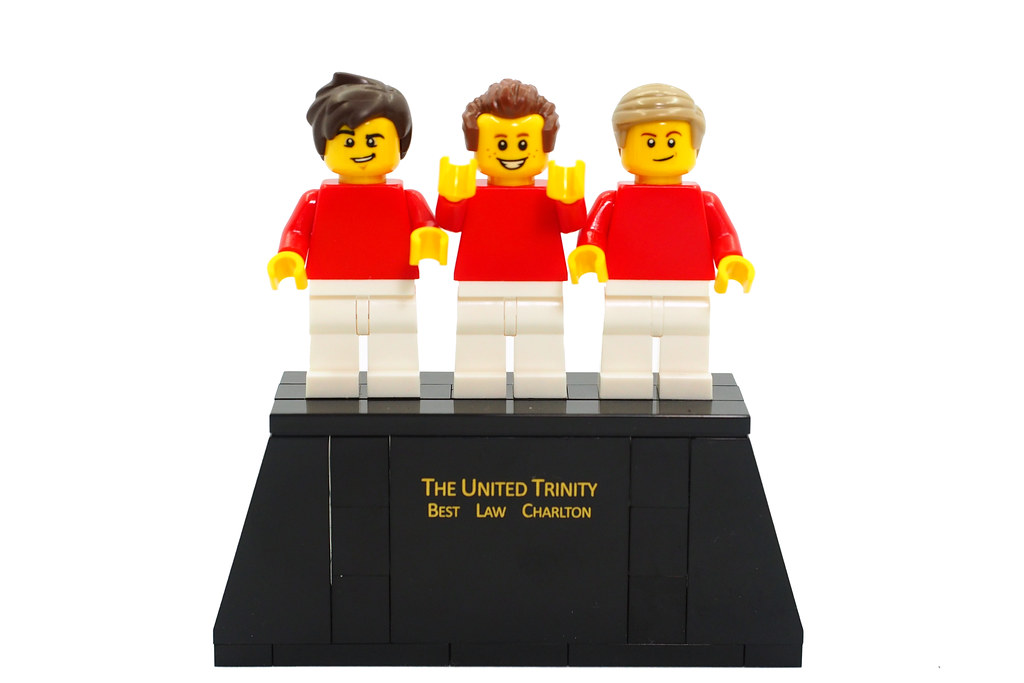 There really isn’t much of a build experience so I’m just going to skip that and go right into the design of the set.

While this may serve as an adequate GWP for an established fanbase, I do feel that it could have been better in a few areas. 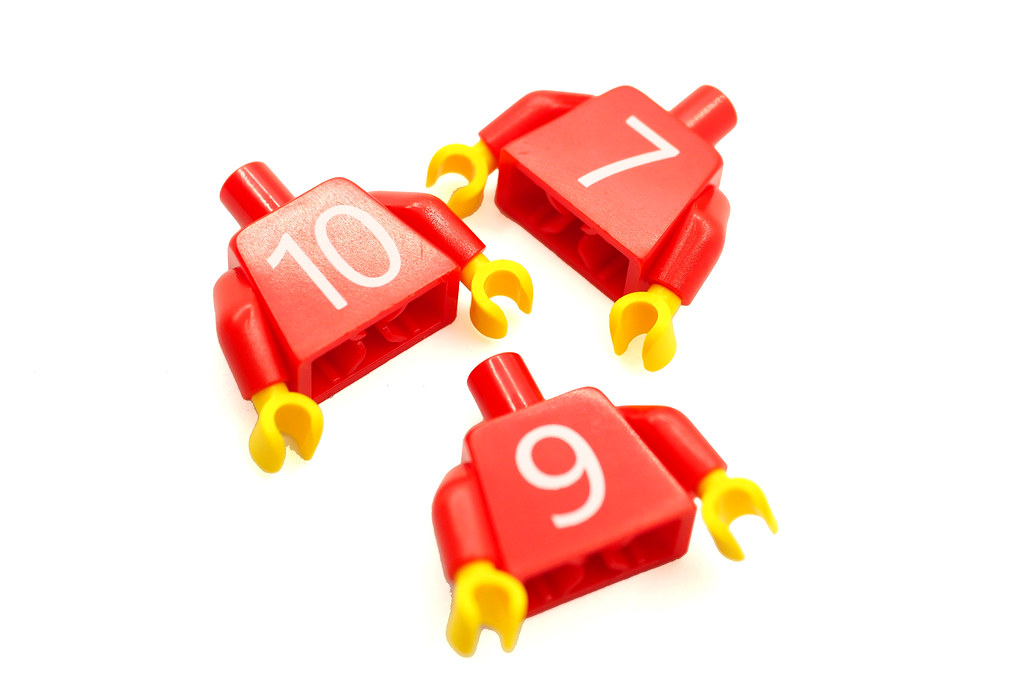 For starters, the front of the torsos are plain and devoid of any prints or markings which was a comment that was bandied about quite often. The only prints are on the back which are the jersey numbers.

Back in 1960’s, their jerseys were designed without any logos or decals on the front so I can’t really fault the designers on that. However, footballers do not play the sport wearing long pants.

For some reason, LEGO opted to give the minifigures plain white leg assemblies which is odd since all football players wear shorts. Even the original statues on the United Trinity podium are depicted with shorts instead of long pants.

I honestly question the decision not to include leg assemblies with shorts printed on them as they have done it before with their very own LEGO Football player from the Collectible Minifigure Series and more recently, the LEGO DFB – The Mannschaft (71014).

Another bit that was a problem for me is that the minifigures are placed too close to each other. I understand that they are meant to mimic the pose of the original statues with Denis Law’s hands raised up but there is actually no space for the three minifigures to stand side by side with their hands down. 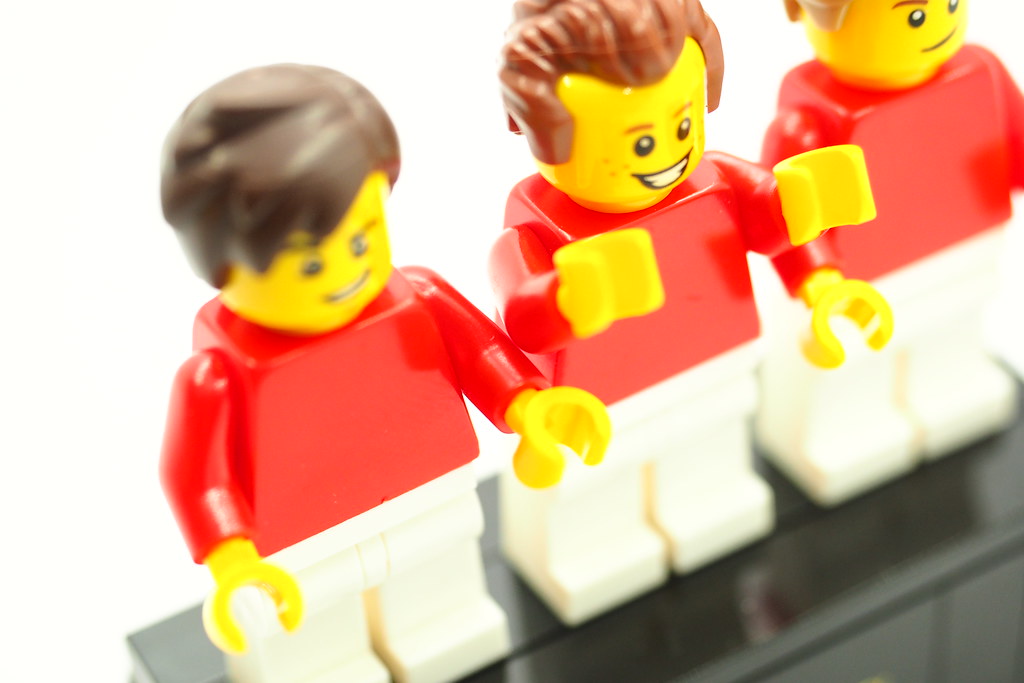 There were some promotional material which featured the Sir Bobby Charlton minifigure holding what appears to be a football. Originally, his hand was empty but then the image was replaced with one with him with the football, then it reverted to the original.

As you can see, the statue of Sir Bobby Charlton is holding a football in his left hand and I think whoever designed the United Trinity set wanted to include it but the ball was probably axed along the way to production.

Frankly, it would have been nice to have a football accessory included with the build as it would be the closest representation of the source material. 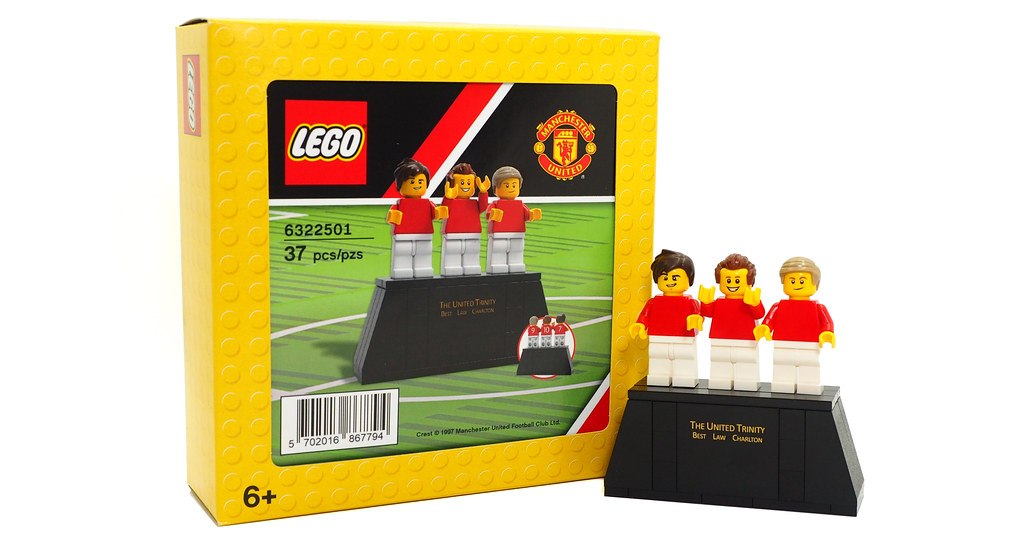 While this is would probably sell out on launch day, I feel that it could have been much better. This feels like it was cobbled together as an after thought rather than something that was planned from the beginning.